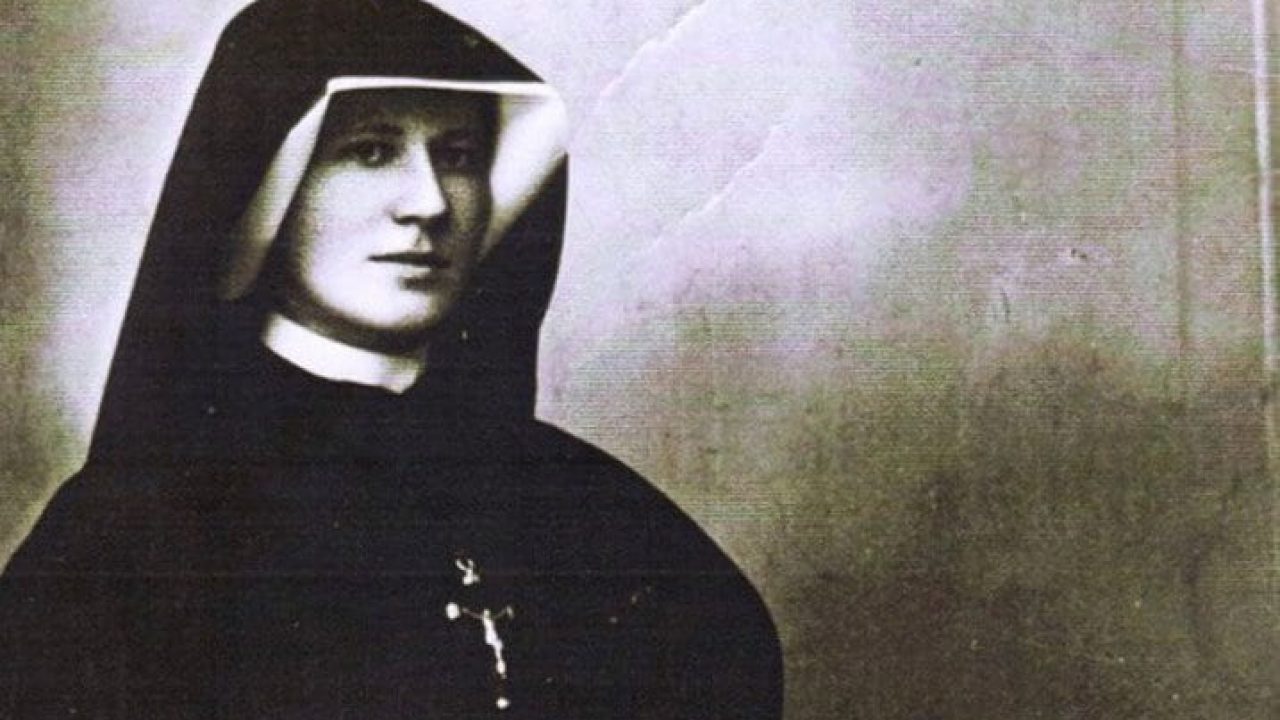 Apostle of Divine Mercy, Prophet of Our Times, Great Mystic, Mistress of Spiritual Life – these are the epithets usually appended to the name of Sister Faustina Kowalska, St Faustyna (Faustina), of the Congregation of the Sisters of Our Lady of Mercy. Sister Faustina Kowalska is one of the Church’s most popular and widely known saints and the greatest mystics in the history of the Church.

Sister Faustina Kowalska was born on 25 August 1905 in Głogowiec, Poland to Marianna and Stanisław Kowalski as the third of ten children. Two days later she was baptized with the name Helena in the parish church of Świnice Warckie.

At the age of nine, she made her first Holy Communion. She attended elementary school for merely three years and then she went to work as a housekeeper in various well–to–do families in Aleksandrów and Łódź.

From the age of seven, she had felt the calling for religious vocation, but her parents would not give her permission to enter the convent. However, impelled by the vision of the Suffering Christ, in July 1924 she left for Warsaw to find a place. For another year she worked as a housekeeper to save some money for a modest monastic trousseau. On 1 August 1925 she entered the Congregation of the Sisters of Our Lady of Mercy in Warsaw on Żytnia St.

She lived in the Congregation for thirteen years, staying in many houses, the longest time (she spent) in Kraków, Płock and Vilnius; working as a cook, shop assistant in baker’s shop, gardener, and portress.

She suffered from tuberculosis of the lungs and alimentary system and that is why for over 8 months stayed at the hospital in Kraków – Prądnik. Greater sufferings from those which were caused by tuberculosis, she offered as a voluntary sacrifice for sinners and as the Apostle of Divine Mercy. She experienced also many extraordinary graces such as: apparitions, ecstasies, the gift of bilocation, hidden stigmata, reading into human souls, the mystical betrothal and nuptials.

Her feast day is on 5. of October.

At the heart of the Divine Mercy shrine in Kraków-Łagiewniki stands the chapel where the miraculous image of Merciful Jesus and the tomb of St. Faustina are to be found. A white marble coffin with the relics of St. Sister Faustina rests on the altar below this image, and one relic has been placed in a marble prie-dieu before the altar, for the convenience of pilgrims wishing to venerate her and ask for her powerful intercession through prayers to The Divine Mercy.

The Łagiewniki Divine Mercy shrine became the centre of devotion to The Divine Mercy, the place from which this message is spread throughout the world and the place to which people from every continent come on pilgrimage. They come asking for many graces, to which the votive offerings in the display cases around the chapel bear witness.

Recommended 3 o clock prayer at the Hour of Mercy:

“O Blood and Water, which gushed forth from the Heart of Jesus as a fount of Mercy for us, I trust in You. You expired, Jesus, but the source of life gushed forth for souls, and the ocean of mercy opened up for the whole world. O Fount of Life, unfathomable Divine Mercy, envelop the whole world and empty Yourself out upon us.

Today, bring to Me all mankind, especially all sinners, and immerse them in the ocean of My mercy. In this way you will console Me in the bitter grief into which the loss of souls plunges Me.

In response to this invitation of Jesus we are praying: Our Father ….. Hail Mary and Glory be ….. then Chaplet of Divine Mercy. In the end are recommended litanies to Divine Mercy.

Today bring to Me the souls of priests and religious, and immerse them in My unfathomable mercy. It was they who gave Me the strength to endure My bitter Passion. Through them, as through channels, My mercy flows out upon mankind. (Followed by prayers as the first day)

Today bring to Me all devout and faithful souls, and immerse them in the ocean of My mercy. These souls brought Me consolation on the Way of the Cross. They were that drop of consolation in the midst of an ocean of bitterness. (Followed by prayers as the first day)

Today bring to Me the pagans and those who do not yet know me. I was thinking also of them during My bitter Passion, and their future zeal comforted My Heart. Immerse them in the ocean of My mercy. (Followed by prayers as the first day)

Today bring to Me the souls of heretics and schismatics, and immerse them in the ocean of My mercy. During My bitter Passion they tore at My Body and Heart; that is, My Church. As they return to unity with the Church, My wounds heal, and in this way they alleviate My Passion. (Followed by prayers as the first day)

Today bring to Me the meek and humble souls and the souls of little children, and immerse them in My mercy. These souls most closely resemble My Heart. They strengthened Me during My bitter agony. I saw them as earthly Angels, who would keep vigil at My altars. I pour out upon them whole torrents of grace. Only the humble soul is able to receive My grace. I favor humble souls with My confidence. (Followed by prayers as the first day)

Today bring to Me the souls who especially venerate and glorify My mercy, and immerse them in My mercy. These souls sorrowed most over My Passion and entered most deeply into My Spirit. They are living images of My Compassionate Heart. These souls will shine with a special brightness in the next life. Not one of them will go into the fire of hell. I shall particularly defend each one of them at the hour of death. (Followed by prayers as the first day)

Today bring to Me the souls who are in the prison of Purgatory, and immerse them in the abyss of My mercy. Let the torrents of My Blood cool down their scorching flames. All these souls are greatly loved by Me. They are making retribution to My justice. It is in your power to bring them relief. Draw all the indulgences from the treasury of My Church and offer them on their behalf. Oh, if you only knew the torments they suffer, you would continually offer for them the alms of the spirit and pay off their debt to My justice. (Followed by prayers as the first day)

Today bring to Me souls who have become lukewarm, and immerse them in the abyss of My mercy. These souls wound My Heart most painfully. My soul suffered the most dreadful loathing in the Garden of Olives because of lukewarm souls. They were the reason I cried out: “Father, take this cup away from Me, if it be Your will.” For them, the last hope of salvation is to flee to My mercy. (Followed by prayers as the first day)

Source of St. Faustina website content from official site: Congregation of the Sisters of Our Lady Mercy – www.faustyna.pl