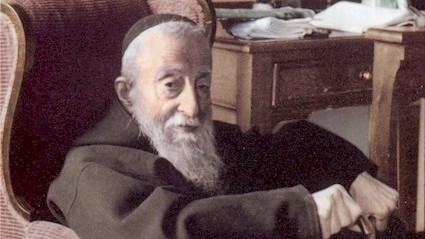 St Leopold Mandic was born in Herzegnovo near Boka Kotorska on May 12, 1866. He was named Bogdan at the baptism, and he was the youngest of 12 children. The father came from an old Bosnian noble Catholic family, but he retained only the nobility of the spirit, otherwise, he was poor. Mother was deeply pious, for which. Leopold was always very grateful.

Bogdan was very intelligent, good, and religious. He knew only for his home, the church, and school. He did not participate in games or parties. When he applied for a seminary at the age of 16, he was sent to Videm by the Capuchins. At 18, he was already in the novice in Bassano del Grappa. By the age of 24, he was a consecrated priest in Venice.

The leaders quickly recognized him, and he also knew very well that he was the best fit for the confession room. Because he had a speaking error, he could not speak clearly; because he had no real performance attitude, he was only 1.35 m tall, and he could not act as a speaker.

He performed this service with great love because of his culture, humility, and holiness of life. There were not just simple people, but especially intellectuals and aristocrats: professors and students, diocesan and clergy… He confessed daily for 10 to 12 hours.

All were welcomed, especially priests. The priests returned this love to him, his golden Mass was attended over 500 priests (September 22, 1940); And at the funeral, they wanted to carry his casket.

His work describes prof. Ezio Franceschini from the Catholic University of Milan:

That was the life of Saint Leopold Mandic: In spite of illness, cold, heat and fatigue, he was confined in a confessional cell of a couple of m2, and he continually received sinners that came before him, with the burden of sins, problems and needs.

Both patient and benevolent, always with vigilant attention and finding suitable words for everyone. Also 10 to 12 hours a day, without stopping, resting, even in the days before his death.

He had a daily renewed living thirst for the souls, to illuminate them with the light of God, to transform one’s own life into giving for others and to give God. That was the life of Saint Leopold Mandic.

Saint Leopold Mandic is the Patron of Cancer sufferers and Confession.

His feast day is celebrated on the 12th of May.

The church of the Capuchin friars of Padua, now better known as the Sanctuary of St Leopold Mandic, is of sixteenth-century origin. It was rebuilt after being almost completely destroyed in World War II.

Its interior is rich with interesting canvases of the sixteenth and seventeenth centuries. Here there is a continuous flow of pilgrims to the tomb of St. Leopold Mandic’s body, situated in a chamber adjacent to the church, near the little room in which the saint heard confessions.

He only knew ‘to confess’. And that is precisely his greatness!”

So said Pope John Paul II in his address during the ceremony of the announcement of the Croatian capuchin blessed Leopold Mandic for a saint on October 16, 1983, at St Peter in Rome. He was previously Beatified on the 2nd of May 1976, in Vatican City, by Pope Paul VI.

The church of the Capuchin friars of Padua, now better known as the Sanctuary of St Leopold Mandic, is of sixteenth-century origin. It was rebuilt after being almost completely destroyed in World War II.

To the front of the confessional cell of St. Leopold is the chapel where, since 1963, the body of the saint has rested. The red marble tomb is visited by an endless stream of pilgrims, attracted by the spiritual strength of a friend who continues to protect and comfort.

Inside the chapel, next to the memorial plaque, is a niche in which a reliquary of the right hand of the saint is displayed, to recall the countless occasions on which he raised this hand to absolve, bless or console.

The painted altarpiece of the chapel, the work of Lino Dinetto, depicts St. Leopold’s mission of bringing souls to the Holy Trinity, through the mediation of Jesus the Redeemer.

The priest’s stole and the Franciscan habit worn by St. Leopold recall his service and the gift of his entire existence: the confessor saint is depicted on his knees as intercessor and as a brother who points out the road that leads to intimacy with Christ. On the exterior, above the tomb, the “Light of Reconciliation” burns day and night.

The rite of the offering of the oil that keeps it burning is renewed every year on 12th May, the liturgical feast of the saint.

God, Almighty Father, you made Saint Leopold a rich source of your grace for all who had recourse to him. Through his intercession, may we live our lives in love, relying entirely on your will, and strong in the hope of your promises.
Glory be to the Father

God, you show your almighty power most clearly when you grant mercy and forgiveness to sinners. You made Saint Leopold an outstanding witness through his ministry in the Sacrament of Reconciliation. Grant us the grace to celebrate the Sacrament joyfully, and so experience your great love.
Glory be to the Father

God our Father, through Christ your Son who died and rose to life, you redeemed us, and you gave us Saint Leopold as a fatherly presence to comfort and guide us in our trials. Pour into our hearts the certainty of your presence and help.
Glory be to the Father

God, source of communion for all your sons and daughters, you wanted Christ to be the only Shepherd of your Church. Through the prayers of Saint Leopold, that silent prophet of spiritual ecumenism, infuse your Spirit into us, so that we may pray and give our lives for the unity of all who believe in you.
Glory be to the Father

God, you wanted Mary to be Mother of Christ and Mother of the Church, and you gave Saint Leopold a tender devotion to our Lady. May we know in our own lives the joy of her motherly protection and love.
Hail Mary

God, glorious Lord and Father of life, we entrust to your love all our hopes and prayers. Through the intercession of Saint Leopold look kindly upon your sons and daughters and hear the prayers you have inspired in us. Through Christ our Lord.
Amen