1. Dimensions of Black Madonna of Czestochowa

The image represents monumental and dignified iconographic structure of a Bizantine Hodigitria, the one who points the way to salvation. She is a Guide, leading the entire humanity to Jesus Christ.

The Image was created most likely in the second half of the XIII century as the Balkan Icon. It was painted with tempera on a canvas, which was attached to the surface of the three lime tree boards, with nimbi carved in them around the heads of the figures. In the years 1430-1434 the icon was the subject of an extensive renovation in Krakow in the court of the King Ladislaus Jagiello.

3. Date of creation from the traditional point of view

Tradition holds that St. Luke painted it on the top of a cypress-wood table that came from the home of the Holy Family. At the request of the faithful, Mary sat for the portrait. When it was finished, she was pleased, saying that “My grace shall accompany it.” Thus began the wonderful history of the painting.

4. Cuts on the painting

Four diagonal slashes crossing each other which are visible on the right cheek of the Blessed Mother, are real cuts made by a sharp tool. They are gradually deepening in the layers of the paint, going as far as injuring the background. Two longer slashes, on the face and on the neck, were pointed out by being painted with vermilion as blood scars in order to commemorate a sacrilege done in the year of the 1430.

The Image of Our Lady of Czestochowa in the present form is a unique example of a harmonious combination of Bizantine art of the East with the Latin culture of the West.

Over time, the monastery at Jasna Gora became a monastic fortress — and the focal point for Polish nationalism. In 1655, the monastery held out against a mighty Swedish army. In 1683, it was the Turks who attacked. And, in 1920, the Bolsheviks.

The heroic defence of Jasna Gora in 1655 during Swedish invasion became a very important vent in history of Poland. In the spirit of thanksgiving for saving the painting, the, the monastery and the entire country, King John Casimir made his vows in 1656 in Lvov, in which he appointed the Mother of Jasna Gora the Queen of the polish Crown.

From that day Jasna Gora became a throne of victorious Queen and a place where everyone could confide to Her all their individual, family and national issues.


Other visited shrine in Poland is in Krakow with the miraculous image of Merciful Jesus with the tomb of St Faustina Kowalska.

Painting is in the Jasna Gora monastery, where the visitors can see:

As a result of previous and other historical events, Our Lady of Czestochowa was crowned as Queen of Poland. Feast is observed on May 3.

In 1909, vandals tore off the gold crown and “overdress” of pearls. This sacrilege was repaired and the portrait was restored with the help of Pope St. Pius X, who furnished a new crown. Pope after Pope has granted spiritual favors to pilgrims visiting the Shrine, enriching it with many privileges.

10. Why Black Madonna of Czestochowa?

“Black Madonna” is a nickname. It refers to skin tones in the portrait of Mary and Jesus.

They and St. Joseph lived in a hot climate. Hence, their skin tone would be dark brown or olive in order to survive the intensity of the sun and avoid skin cancer.

Not until the Renaissance were there paintings of Jesus and Mary with alabaster skin, blue eyes and blond hair. Previously, all religious artwork reflected the olive skin, with black or brown hair and eyes attributed to the Holy Family and the Apostles.

In the 2017 it will be 300 years anniversary from the coronation. Several Pontiffs have recognised the venerated icon, beginning with Pope Clement XI who issued a Canonical Coronation to the image on 8 September 1717 via the Vatican Chapter. 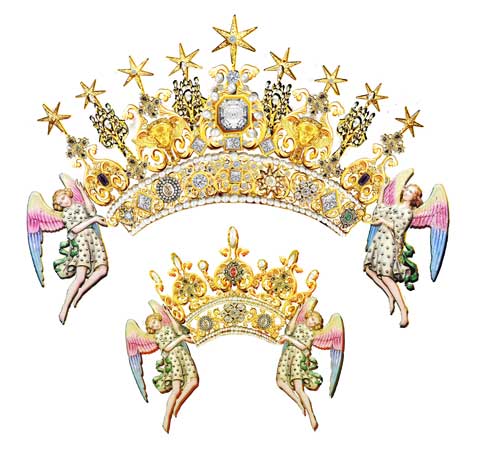 Categories: Articles Tags: Black Madonna, Jasna Gora, Our Lady of Czestochowa, Poland, St. Luke
← PreviousNext →
Let nothing disturb you, nothing frighten you. All things pass. God does not change. Patience achieves everything. He who has God finds he lacks nothing: - St Teresa Of Avila