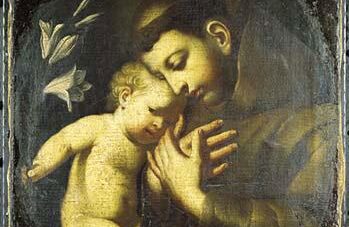 St. Anthony, whose baptismal name was Ferdinand, was born in Lisbon in 1195, the eldest son of an influential family. His parents had great plans for him, and so they arranged for a sound education. They were thinking of an ecclesiastical or bureaucratic career, but Ferdinand disappointed them by choosing a life more directly dedicated to the service of the Lord.

When he was fifteen, after much prayer and reflection, he left his rich home and went to live in the Augustinian Abbey of St. Vincent on the outskirts of Lisbon. The Canons Regular of St. Augustine, the religious order which he joined, has always been famous for their dedication to scholarly pursuits. It is to the Augustinians that the Saint is indebted for his intellectual formation, which made him one of the most learned clerics in Europe at the beginning of the thirteenth century.

After his ordination, Ferdinand was placed in charge of hospitality in his abbey. It was in this responsibility that he first came into contact with the Franciscans. In 1219 he met five followers of St. Francis who were on their way to Morocco to preach to the Muslims. He was strongly attracted by their simple Gospel lifestyle.

Then in February 1220, news arrived that his five Franciscan friends had been martyred in Morocco. Their remains had been gathered together and sent to Portugal, where they were being venerated as relics of martyrs of the faith. The king ordered them to be placed in the Church of the Holy Cross in Coimbra.

Ferdinand eventually obtained permission from his superiors to join the Franciscans. He was invested with the Franciscan habit and began to learn the teachings of their holy founder St. Francis. With this new lifestyle, he also took on a new name. He called himself Anthony, after the hermit St. Anthony of the desert to whom the Franciscan hermitage was dedicated.

Anthony had traveled from Coimbra in Portugal to the shores of Morocco, then to Sicily, then to Assisi, and finally to a small hermitage in Montepaolo. Anthony traveled throughout Northern Italy and Southern France, preaching especially in the areas that had been plagued by heresy. He combated both waves of abuse in the Church (e.g. political intrigues, moral decadence which had caused many to lose their faith, as well as the heretical positions (e.g. rejection of creation as evil, rejection of Church authority and the sacraments) which confused the faithful. His most powerful weapon against these enemies was his Gospel lifestyle, for by living what he preached he was able to confound heretics and edify Catholics.

Anthony was assigned the post of Minister Provincial (or guide of Franciscan fraternities) in northern Italy, probably during the years 1227-1230. The task involved visiting several monasteries in northern Italy. Anthony, however, had a preference for the city of Padua and the small Franciscan community at the simple church of Santa Maria Mater Domini (later extended and transformed into the current Basilica of St. Anthony).

In Padua, Anthony concluded a couple of relatively short stays: the first, between 1229 and 1230; the second, between 1230 and 1231, during which he died prematurely. Although the time he spent in Padua was short, Anthony established a very strong bond with this city

Anthony is famous throughout the world as the saint who helps to find lost objects:  everyday items, important documents, even the faith itself. The prayer that follows invokes the aid of Saint Anthony in search of what has been lost.

Glorious Saint Anthony, you have exercised the divine power to find what was lost. Help me to recover the grace of God, and make me zealous in the service of God and in the practice of living the virtues. Let me find what I have lost, thus showing me the presence of your goodness.

(Our Father, Hail Mary, Glory Be)

Anthony, a glorious servant of God, famous for your merits and powerful miracles, help us to find what was lost. Give us your help in times of temptation, and enlighten our minds in searching the will of God. Help us to find again the life of grace, which our sin destroyed, and lead us to the possession of the glory promised us by the Savior. We ask this through Christ our Lord. Amen.

The chapel of the tomb of St Anthony of Padua

The Saint’s tomb has been called the “Ark” from the very beginning. The Saint’s tomb is in the altar in this chapel, at head height. Originally it was located (from 1231 to 1263) in the little chapel of St. Maria Mater Domini (today the Chapel of the Black Madonna) and from 1263 to 1310 in the center of the Basilica, in the Presbytery, under the present conical cupola. The location of the tomb from 1310 to 1350 is uncertain, however, it might have been in its current position. It has remained in this chapel from 1350.