Sanctuary of Our Lady of Fatima Portugal – Santuario de Nossa Senhora de Fatima is one of the largest Marian shrines in the world. Our Lady of Fatima is the title given to the Blessed Virgin Mary according to her apparitions to three shepherd children at Fatima on the 13th day of six consecutive months in 1917. Fatima Portugal, receives about 4-5 million pilgrims a year.

Our Lady of Fatima prayer

Prayers taught by Our Lady

O Jesus, it is for love of You, and for the conversion of sinners and in reparation for the sins committed against the Immaculate Heart of Mary!

O my Jesus, forgive us, save us from the fire of hell; lead all souls to Heaven, especially those who are most in need.

Prayers taught by the Angel

My God, I believe, I adore, I hope and I love You! I ask pardon of You for those who do not believe, do not adore, do not hope and do not love You!

Most Holy Trinity, Father, Son and Holy Spirit, I adore You profoundly and I offer You the most precious Body, Blood, Soul and Divinity of Jesus Christ, present in all the tabernacles of the world, in reparation for the outrages, sacrileges and indifference with which He is offended. And through the infinite merits of the Sacred Heart and the Immaculate Heart of Mary, I beg the conversion of poor sinners. 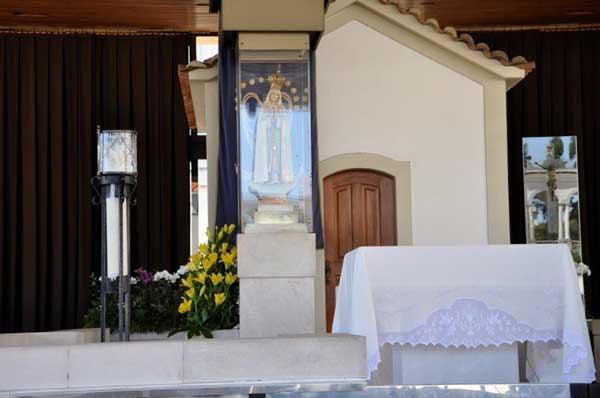 In the Little Chapel

What the pilgrim should see:

THE CHAPEL OF APPARITIONS

The very heart of the Sanctuary of Our Lady of Fatima. It was the first edifice constructed in the Cova da Iria, at the place of Our Lady´s Apparitions.

The exact spot is marked by a marble pillar on which the Statue of Our Lady is placed. Here converge the four million pilgrims who visit the Sanctuary each year.

The Blessed Sacrament is, since January 1, 1960, exposed and adored, day and night, at the Shrine of Fatima.

On July 13, 2008, Perpetual Adoration has been transferred to the Chapel of the Blessed Sacrament in Most Holy Trinity Church. 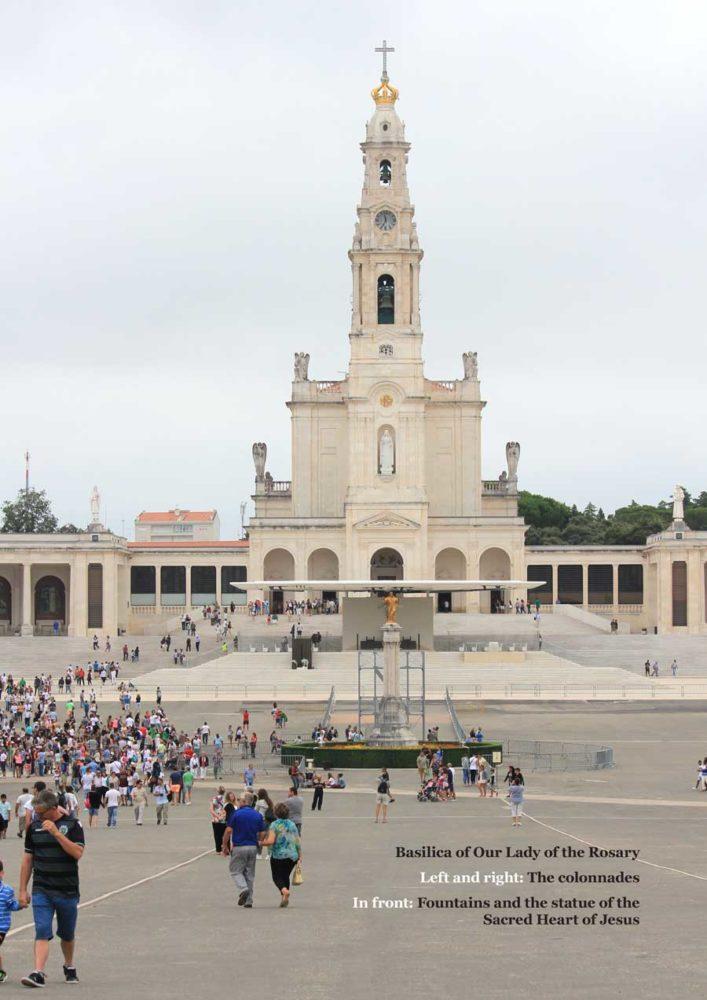 At the entrance of the Sanctuary, on the south side of the Rectory, one may visit a monument of the Berlin Wall´s, consisting of a concrete segment that was part of it. (The Walls construction started during the night between the 12th. and 13th. of August 1961 and its demolition began the 9th. of November 1989)

This segment was offered by means of Virgilio Casimiro Ferreira, a Portuguese immigrant to Germany and is here placed as a grateful memorial of God´s intervention for the fall of Communism as promised at Fatima. The segment weighs 2,600 kilos (5,732 lbs.) and measures 3.60 meters (11 ft. 9 in.) high by 1.20 meters (3 ft. in.) wide.

BASILICA OF OUR LADY OF THE ROSARY OF FATIMA

The painting above the high altar depicts the Message of Our Lady to the little shepherds, prepared by the Angel of Portugal, through their encounter with Christ in the Eucharist. The Bishop of the diocese is shown kneeling on the left side, and the figures of Pope Pius XII (who consecrated the world to the Immaculate Heart of Mary in 1942, and whose Legate crowned the Statue of Our Lady in 1946), of Pope John XXIII and Pope Paul VI.

Scenes of the apparitions are represented in stained glass, as well as invocations from the Litany of Our Lady.

In the four corners of the Basilica, interior have placed the statues of the great apostles of the Rosary and of devotion to the Immaculate Heart of Mary: St. Anthony Claret, St. Dominic of Gusman, St. John Eudes and St. Stephen, King of Hungary.
The tombs of Francisco and Jacinta are in the Basilica, and, in the chancel, are the mortal remains of D. José Alves Correia da Silva, first Bishop of Leiria after its restoration in 1920.

MONUMENT TO THE SACRED HEART OF JESUS (1932)

Which stands in the center of the square, over a spring found there, its waters being the instrument of many graces.

A building on the right side of the Esplanade, in the House of Our Lady of Carmel.

HOUSE OF OUR LADY OF CARMEL

Which is above and behind the Rectory, with accommodation for 250.

HOUSE OF OUR LADY OF DOLOURS

Situated behind the Chapel of Apparitions, it is destined to receive the Sick during the great pilgrimages, and also for retreats and accommodation for pilgrims in general, to the number of 300.

Inaugurated on 13 May 1982, by Pope John Paul 11, as a center for study and reflection on the Message of Fatima, and of the problems of the modern world, in the light of the Gospel.

The two auditoriums have seating for 2.124 and 700 and accommodation for 400 pilgrims. Visiting is possible when there are no activities.

The Seers of Fatima Portugal

See our list of top 15 Catholic shrines around the world.

Francisco Marto – He was born on 11 June 1908, in Aljustrel. He died a saintly death on 4 April 1919, in his parent’s house. Very sensitive and contemplative, he directed all his prayer and penance towards “consoling Our Lord”. His mortal remains were buried in the parish cemetery until 13 March 1952, on which date they were translated to the Basilica of Our Lady of Fatima on the eastern side.

Jacinta Marto – She was born in Aljustrel on 11 March 1910. Her holy death took place on 20 February 1920, in the Hospital of D. Estefania. In Lisbon after a long and painful illness, offering all her sufferings for the conversion of sinners, for peace in the world and for the Holy Father.

On 12 September 1935, her body was solemnly translated from the family tomb of the Baron of Alvaiazere in Ourém to the Fatima cemetery. Placed beside the mortal remains of her brother Francisco. On I May 1951, the translation of Jacinta´s mortal remains took place. With the greatest simplicity, to a new tomb prepared in the Basilica of Our Lady of Fatima, on the western side.

The process of beatification of the Seers of Fatima, Francisco, and Jacinta Marto, after the first steps taken in 1945. was opened in 1952 and concluded in 1979.  Francisco and Jacinta Marto were canonized as Saints in the Shrine of Fatima, on the 13th of May 2017, during the Mass of the first International Anniversary Pilgrimage of the Centennial of the Apparitions.

Mass times and Programme in the Little Chapel

The Blessed Sacrament is, since January 1, 1960, exposed and adored, day and night, at the Shrine of Fatima in the Perpetual Adoration chapel.

On 13 May 1917, three children were pasturing their little flock in the Cova da Iria, parish of Fatima, town of Vila Nova de Ourém. today the diocese of Leiria-Fatima. They were called: Lucia de Jesus, aged 10, and her cousins Francisco and Jacinta Marto, aged 9 and 7.

About midday, after praying the Rosary, as was their custom, they were amusing themselves building a little house of stones scattered around the place where the Basilica now stands. Suddenly they saw a brilliant light, and thinking it to be lightning, they decided to go home. But as they went down the slope another flash lit up the place, and they saw on the top of a holmoak (where the Chapel of Apparitions now stands), “a Lady more brilliant than the sun”, from whose hands hung a white rosary.

The Lady told the three little shepherds that it was necessary to pray much, and she invited them to return to the Cova da Iria during five consecutive months, on the 13th day at that hour. The children did so and the 13th day of June, July, September and October, the Lady appeared to them again and spoke to them in the Cova da 0a. On the 19th of August, the apparition took place at Valinhos, about 500 meters from Aljustrel, because on the 13th the children had been carried off by the local Administrator to Vila Nova de Ourém.

Fatima for Today: The Urgent Marian Message of Hope

At the last apparition, on October 13, with about 70,000 people present, the Lady said to them that she was the “Lady of the Rosary” and that a chapel was to be built there in her honor. After the apparition all present witnessed the miracle promised to the three children in July and September :the sun, resembling a silver disc, could be gazed at without difficulty and, whirling on itself like a wheel of fire, it seemed about to fall upon the earth.

Afterwards, when Lucia was a Religious Sister of Saint Dorothy, Our Lady appeared to her again in Spain (10 December 1925 and 15 February 1926, in the Convent of Pontevedra, and on the night of 13/14 June 1929, in the Convent of Tuy), requesting the devotion of the five first Saturdays (to pray the Rosary, meditate on the mysteries of the Rosary, confess and receive Holy Communion, in reparation for the sins committed against the Immaculate Heart of Mary), and the Consecration of Russia to the same Immaculate Heart, This request had been announced by the Apparition on 13 July 1917, in what is called the “Secret of Fatima”.

Since 1917 pilgrims have not ceased to come to the Cova da Iria in thousands upon thousands from all parts of the world, at first on the 13th of each month. later during the summer and winter holidays, and now more and more at weekends and any day all the year round.

Posted in Portugal and Top Shrines

Let nothing disturb you, nothing frighten you. All things pass. God does not change. Patience achieves everything. He who has God finds he lacks nothing: - St Teresa Of Avila