Saint Gerardo Maiella, Redemptorist is invoked all over the world as the Saint of Mothers and Children.

Majella was beatified in Rome on January 29, 1893, by Pope Leo XIII. He was canonised less than twelve years later on December 11, 1904, by Pope Saint Pius X. The feast day of Saint Gerard Majella is October 16.

Gerard did not possess any degree of bodily strength, but was renowned for his great gifts of the spirit.

He was a model of virtue, deeply committed to the vows he took upon his profession as a brother, and displayed extraordinary wisdom and a gift for reading consciences.

A number of miracles have been attributed to him, including restoring to life a boy who had fallen off a cliff, multiplying food to feed hungry peasants, and walking on the water to lead fishermen through stormy waves.

A miracle attributed to Gerard that enabled a woman who was near death while in the throes of childbirth to both live and give birth to a healthy child led to St. Gerard Majella’s designation as the patron saint of expectant mothers and children.

It is also said that Gerard was gifted with the powers of levitation and bi-location – gifts associated with other mystics as well.

The earliest information on the existence of the Sanctuary dates back to the year 1200, when the church was under the title of Sancta Maria de Silere (Santa Maria del Sele), administered by the Archdiocese of Conza.

It is impossible, if not at the expense of great sacrifices and without the certainty of concrete results, to go backward beyond this date. There are two legends that are still circulating today and sometimes confusing on the origin of Mater Domini: the first one, to be found by some shepherds in the woods. See our Top 15 catholic shrines around the world.

The second, claims that it appeared (referring to Mater Domini)  to some peasants, to whom she asked and obtained that there would build a chapel in her honor.

St. Gerard’s Basilica has been rebuilt and expanded on its original site in several stages. After the Canonization in 1904, the flow of pilgrims grew to such an extent that the magnification of the temple in honor of St. Gerardo became the main urgency.

On February 18, 1930, Pope Pius XI granted the shrine title of Minor Basilica. The diocesan papers say that the facade of the Basilica was in neo-classical style and built with Pescopagano stone with the interior of a Latin cross.

It had three naves with a double bend system and the vault had carved stuccos with ornamental paintings. The stained-glass windows replicated episodes of the life of the saint. 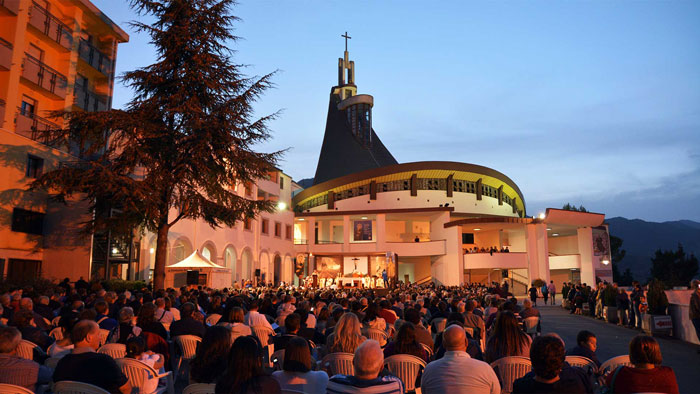 In 1931 the statue of the “Materdomini” was crowned with a gold diadem from the Vatican Chapter. All this wealth of art and devotion was destroyed by the terrible earthquake of November 23, 1980.

Twenty years later, on April 30, 2000, during the Grand Jubilee, it was returned to the worship of the Basilica.

No more than many friezes and frescoes have been rebuilt on the same plant as the previous one, resulting in a little longer elongation since the entrance porch was embedded.

Another variation is the location of the tomb of the saint who is no longer in the altar of the right nave, where the statue of S. Gerardo remained but in the center of the church behind a beautiful marble altar.

New urn in crystal, silver and mother-of-pearl, which contains the body as San Gerardo.

Saint Gerardo Maiella was born on April 6, 1726 in Muro Lucano, to Domenico Maiella and Benedetta Galella. At the baptism they called him Gerardo. He had a difficult childhood. Majella was the youngest of five children.

He was the son of a tailor who died when Gerard was twelve, leaving the family in poverty. His mother then sent him to her brother so that he could teach Gerard to sew and follow in his father’s footsteps. 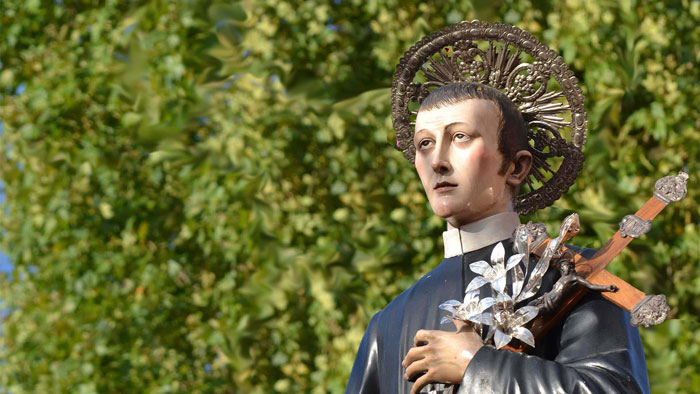 However, the foreman was abusive. The boy kept silent, but soon his uncle found out and the man who taught him resigned from the job. After four years apprenticeship, he took a job as a servant to work for the local Bishop of Lacedonia.

Upon the bishop’s death Gerard returned to his trade, working first as a journeyman and then on his own account. His earnings he divided between his mother and the poor, and in offerings for the souls in purgatory.

Patron Saint of Expectant mothers and of Fertility

Years later when the girl—now a married woman—was on the verge of losing her life in childbirth, she remembered the words of the saintly lay brother. She asked for the handkerchief to be brought to her.

Almost immediately the pain disappeared and she gave birth to a healthy child.One miracle in particular explains why Majella became known as the special patron of mothers. A few months before his death, Gerard visited the Pirofalo family and accidentally dropped his handkerchief.

One of the Pirofalo girls spotted the handkerchief moments after he’d left the house, and she ran after Gerard to return it. “Keep it,” he said to her. “You may need it some day”.

He tried to join the Capuchin Order, but his health prevented it. In 1749 he joined the Congregation of the Most Holy Redeemer, known as Redemptorists.

This order was founded in 1732 by St. Alphonsus Liguori (1696-1787) at Scala, near Naples. They are essentially a missionary order dedicated to “preaching the word of God to the poor.” 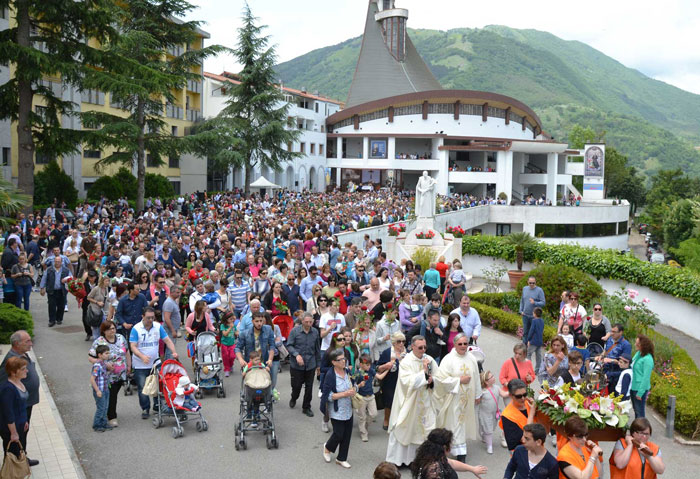 Mass times at the Sanctuary

Opening Hours of the Shrine

The Sanctuary is open every day of the year, opens at the first Mass of the morning and closes at the end of the last Mass.

Mass times at the Sanctuary

Posted in Europe and Italy

The Basilica of Saint Rita of Cascia, Italy – with body and Tomb of St Rita
Sanctuary of Saint Philomena in Mugnano del Cardinale – see her Prayer and Image
Let nothing disturb you, nothing frighten you. All things pass. God does not change. Patience achieves everything. He who has God finds he lacks nothing: - St Teresa Of Avila