Rocamadour, was built on a rock wall at a point where the mummified body of an old hermit was discovered. In the middle ages, people believed this was a miracle.

Labeled one of the 300 “Most beautiful villages of France“, Rocamadour is a true jewel clinging to the rock wall. Registered on UNESCO‘s world heritage list as a stage on the Way of St. James.

A place of Catholic pilgrimage in France since the 10th century, the basilica of Saint Sauveur is dedicated to the Virgin Mary where she is called the “Black Virgin”.

In the Middle Ages, Rocamadour was one of the most important pilgrimages in Europe, with Rome, the Mont Saint Michel and the Ways to Santiago de Compostela.

“Hope as solid as the rock” is the motto of this sanctuary of France.

Rock paintings show us that the cliffs of the Alzou valley were inhabited as early as 25 000 years before our era; thus, from the beginning, men have prepared a place for the Virgin Mary in Rocamadour.

A small oratory was probably built after the Council of Ephesus, led by the Benedictine monks of Marcilhac-sur-Cele.

Highlights of the Sanctuary of Rocamadour

This chapel was formerly dedicated to Saint Louis, king of France and illustrious pilgrim of Rocamadour.

Since October 2011, it has been specially designed for pilgrims of rugby sport. As well as prayer for rugby players who have been injured in games or post-games.

It houses a replica of the statue of Notre-Dame-du-Rugby: the original is in the chapel of the same name in Larrivière-Saint-Savin (Landes).  The jerseys on display were donated by players in gratitude to the Virgin Mary.

The chapel Saint-Blaise shelters the bell-tower of the Sanctuary. During the Hundred Years War, its western window served as a surveillance point above the Grand Staircase.

Saint Blaise was a miracle worker of the fourth century. Pilgrims often pay here for a bodily cure. Saint Blaise in particular is praised for sore throats.

Today, many pilgrims come to pray in front of the icon of the merciful Christ inspired by a vision of Saint Faustina (1905-1938).

This chapel is also called “Chapel of Divine Mercy”. 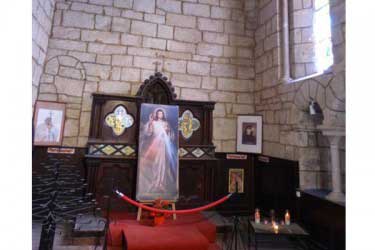 The stained glass window of the 19th century depicts the Virgin Mary, a young girl with her parents, Saint Anne and Saint Joachim.

The dove, symbol of the Holy Spirit watches over her. The baroque altarpiece dates from the late seventeenth century and was at the time in the chapel of Notre-Dame.

It bears witness to the restoration of the Sanctuary after the looting of the Huguenots in 1562 and illuminates the mystery of the Black Virgins. Below the old site of the statue of Our Lady of Rocamadour, we can still read: “Nigra sum sed formosa”, “I am black and yet beautiful”.

On the walls of the chapel, photos of engravings show the ruins of the Sanctuary after the French Revolution, the Grand Staircase of Pilgrims, and an excerpt from the Book of Miracles. 126 miracles were recorded by the Benedictines in 1172, in a book now preserved in the National Library.

Built in the twelfth century, in a very refined Romanesque style, in order to enlarge the terrace and support the upper church.

These are the foundations of Saint-Sauveur Church. The crypt sheltered during the four centuries the intact body of saint Amadour, which was desecrated during the Religion Wars. On the 31st of October 2011, Bishop Norbert Turini, Bishop of Cahors, dedicated the new altar to the crypt.

Mass is celebrated at 11 am every day from Monday to Friday. This is also where the services are sung and the adoration of the Blessed Sacrament takes place.

The Basilica of Saint-Sauveur

The Basilica of Saint-Sauveur is the largest of the churches of Rocamadour. It is the basilica since 1913. Built at the beginning of the 13th century, it is a UNESCO World Heritage Site.

The basilica became the parish church of Rocamadour. Mass is celebrated at 11 am on every Sunday. Confessionals also allow to receive the sacrament of reconciliation.

Chapel of Our Lady of Rocamadour

This is the heart of the Sanctuary. Under the rock, at the feet of Our Lady, the pilgrims reach thier goal. The chapel has undergone great transformations. Destroyed for the first time by the fall of a rock in 1476, it was rebuilt in flamboyant Gothic style, then enlarged in the nineteenth century.

The statue of Our Lady, carved in a walnut wood, dates from the 12th century. She presents the child Jesus on his left knee, and offers it without holding it back.

At the top of the vault, the miraculous bell is the oldest object of the Sanctuary. It rings all alone when Our Lady of Rocamadour intercedes for some sailor in distress.

Mass is celebrated at 11 am on Saturday, a day dedicated to the Virgin Mary. You can place a candle and entrust your intentions of prayer.

Chapel of Our Lady of Rocamadour

Semi-troglodytic, the chapel of Saint-Michel is the highest of the Sanctuary. It has neither roof nor western wall. It is dug in the rock.

The pilgrims of the Middle Ages did not have access to it: it was the private chapel of the Benedictine monks who built the Sanctuary in the 12th century.

The apse in “cul-de-four” is decorated with a painting of the thirteenth century representing Christ in glory. He is surrounded by the four evangelists who write the “Good News”. Saint Michael on the left weighs the souls on the day of the Last Judgment, while on the right, a seraph is ready to welcome us to heaven.

Bénévole à Rocamadour ? What else ?! from RocaStudio on Vimeo.

Rock paintings show us that the cliffs of the Alzou valley were inhabited as early as 25 000 years before our era; thus, from the beginning, men have prepared a place for the Virgin Mary in Rocamadour.

A small oratory was probably built after the Council of Ephesus, led by the Benedictine monks of Marcilhac-sur-Cele.

Shrine of St Bernadette Soubirous of Nevers France and her incorrupt Body which has not decayed
Sanctuary of Our Lady of Pontmain
Let nothing disturb you, nothing frighten you. All things pass. God does not change. Patience achieves everything. He who has God finds he lacks nothing: - St Teresa Of Avila