Home » Listing » Europe » Basilica of Mary Magdalene. Pilgrimage in the footsteps of the one who first saw the Risen One

Allowing the pilgrims to pay a solemn homage to the one who throughout her life announced the resurrection of Christ. It is the place of mission in the Church: “Go tell your brothers that I ascend to my Father and your Father, my God and your God.”

Third tomb of Christendom, the basilica of Saint-Maximin houses the relics of Saint Mary Magdalene. The Saint-Maximin Basilica is the only large gothic church in Provence. See Top 15 Catholic shrines around the world. 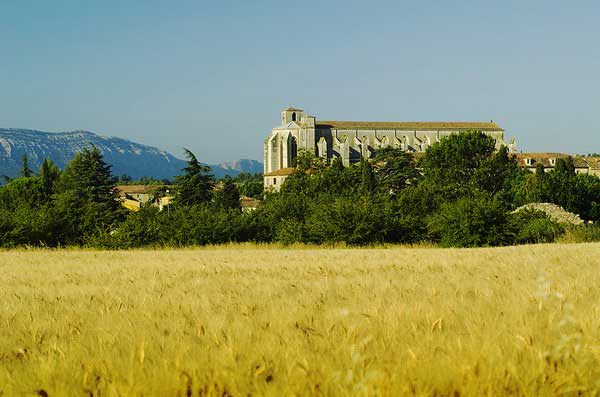 In the 13th Century, Provence was a State separate from France, governed by the Counts of Provence.

The Basilica of St Mary Magdalene is a lovely example of Gothic architecture. From the highway below it rises from the hills in all it’s splendor. The expressive art and individual chapel areas in the interior induce a feeling of privacy and intimacy to meditate,which creates a feeling of being in a very special sanctuary. The crypt below is believed to contain the remains Mary, drawing visitors from all parts of the world. See other Catholic sites in France.

Virtual tour of the Basilica

Pilgrimage in the footsteps of St Mary Magdalene

Pilgrimage in the footsteps of the one who first saw the Risen One, Mary Magdalene, apostle of the apostles. What is proposed to you on the Basilique Sainte-Marie-Madeleine: 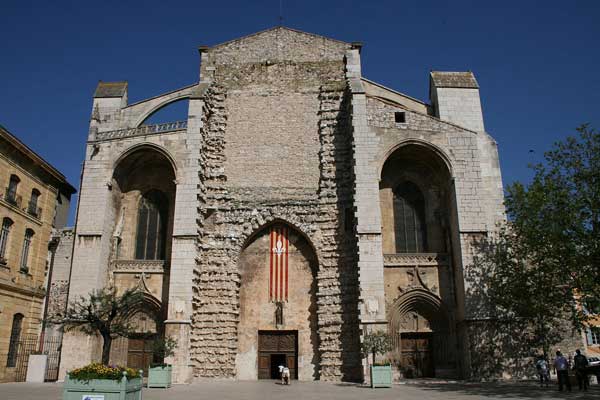 The history of the pilgrimages shows that the two Provençal sites concerned by the presence of St Mary Magdalene, on the one hand the cave of the Sainte-Baume and on the other the Basilica of Saint-Maximin, are closely associated. The various pilgrims, whether of royal blood or private individuals, have always visited the two places one after the other:

The tomb of St Mary Magdalene

Despite its small dimensions (19m2), the crypt is the heart of the basilica. In addition to the reliquary of the « chef » (the head) of Mary Magdalene, it encloses four sarcophagi dating from the second half of the 4th Century.

The reliquary dates from 1860 and replaces the silver and gold one stolen during the Revolution. It contains the saint’s skull. Recently appraised , it is declared to be that of « a small Mediterranean type woman, about sixty years of age. » A crystal tube is sealed to the bottom of the reliquary. It encloses what has always been called the Noli me tangere (Do not touch me) a fragment of skin and bone tissue clinging to Mary Magdalene’s frontal bone on which Christ had placed his fingers on the morning of the Resurrection. This fragment had become detached from the skull during a review of the relics slightly before the Revolution. 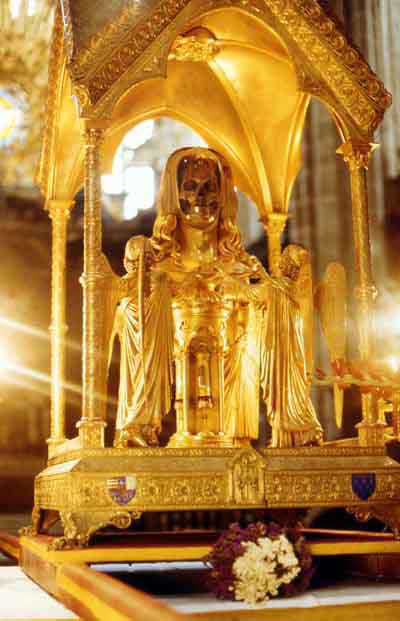 The reliquary dates from 1860 contains the saint’s skull.

The sarcophagi are assigned to Mary Magdalene, the Saint Sidony, Maximin (and the Holy Innocents) and Marcelle. The four bear witness to the primacy of Peter and thus to the papacy. On the third one is sculpted a remarkable scene, deeply rooted in christendom, by its antiquity and inspiration : the stable and star, a smiling Jesus in the crèche, Mary thoughtful, the ox and the donkey, as well as, in an bold chronological image, the arrival of the three Magi.

Finally, the crypt contains four engraved plaques, said to have come from the chancel, a railing that separates the choir from the church: a young Mary at the temple of Jerusalem, David in the lions’s den, Abraham’s sacrifice, a female praying figure.

There is also a grotto area about forty five minutes away which unlike the basilica is a hike in the hills and considered a shrine to Mary Magdalene. The cave represents a place of penance and contemplation. 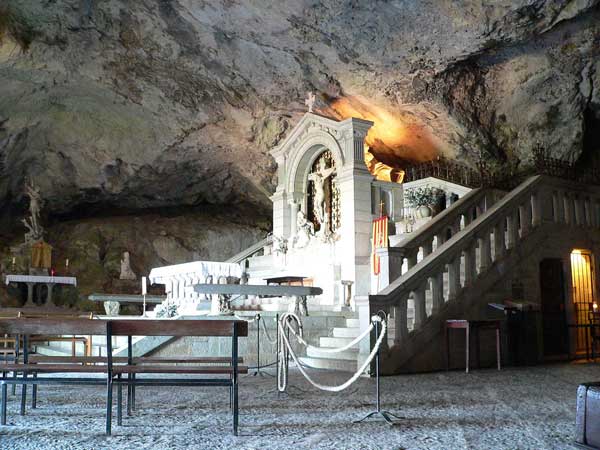 The Saint-Maximin organ along with the one in the Cathedral of Poitiers are the two best and most beautiful realizations, identical to their original condition, of what is referred to as the « French organ». French and foreign organists, all dream of one day playing on this « Stradivarius » of organs.

This double organ-case instrument, was built and completed in 1773 by Brother Jean-Esprit Isnard, of the Tarascon monastery, one of the most skilled organ makers of his time. Besides its bellow, it has kept all of its original pipes. For a total of 43 organ stops, one can count 2 960 pipes. The longest measures 5 m 28 by 30 cm in diameter, the smallest 18 mm by 11. 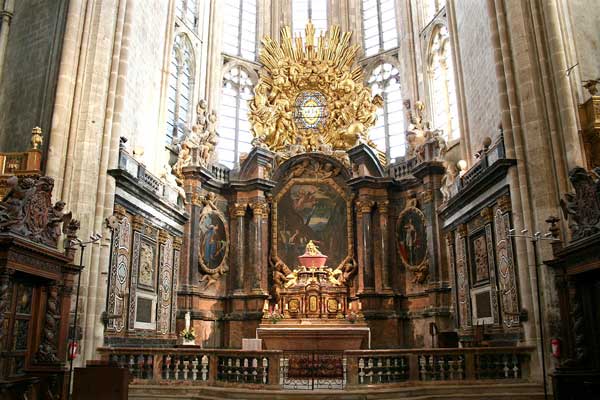 It was placed on a specially constructed organ loft. The pipes are framed within five turrets topped by domes which serve as a base for remarkable sculptures, two of which measure more than two meters : King David and Saint Cecilia.

It was declared an « historical monument » in 1953. The last restoration was performed from 1988 to 1991 by the organ-builder Cabourdin.

From the encyclopedic work of Abbot Faillon and other historical documents, Marie-Christine Trouillet, archivist and paleographer, present the events related to the discovery of the relics of Saint Mary Magdalene at Saint-Maximin and their approval Pontifical by Boniface VIII.

These numerous facts which speak in favor of the authenticity of the relics and their discovery in Provence by Charles of Salerno make the link between history and tradition.

Paintings in the basilica of St Mary Magdalene

The basilica contains several works of exceptional quality, the first of which can be found at the upper end of the north nave. It is the 1520 Crucifixion altarpiece by Antoine Ronzen, a painter of Flemish origin, who had first come to work in Marseilles (the famous painting entitled, Preaching, exposed in the Old Marseilles Museum) then in Saint-Maximin.

Surrounding the central panel that shows Christ on the cross, classically looking down at Mary Magdalene before an interesting image of Jerusalem with its « Omar mosque, » there are sixteen panels describing scenes from the Passion. Particular notice should be made of the first representation of the Palace of the Popes in Avignon, as well as the Roman Coliseum and Saint Marc’s Square in Venice, birthplace of the painter. 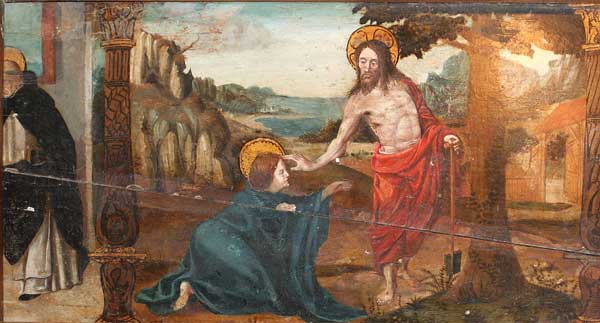 Many other paintings will retain the visitor’s attention. A must see is the inside panel of the altar painting in the seventh, left side chapel evoking the Noli me tangere (Do not touch me) of the day of Resurrection. A huge enigmatic mural, in large part hidden from the eyes by the organ console and pipes, shows the resurrected Christ looking at Mary Magdalene.

Recently returned from restoration in Marseilles are the painted wood panels attributed to Prior Abellon (first half of the 15th Century) that present four saints: Lawrence, Anthony, Sebastian and Thomas Aquinas with their symbols. Further mention is made in the last paragraphs of Chapter 7.

The tomb of Mary Magdalene

Pilgrimage in the footsteps of the one who first saw the Risen One, Mary Magdalene, apostle of the apostles

What is proposed to you on the Basilique Sainte-Marie-Madeleine: 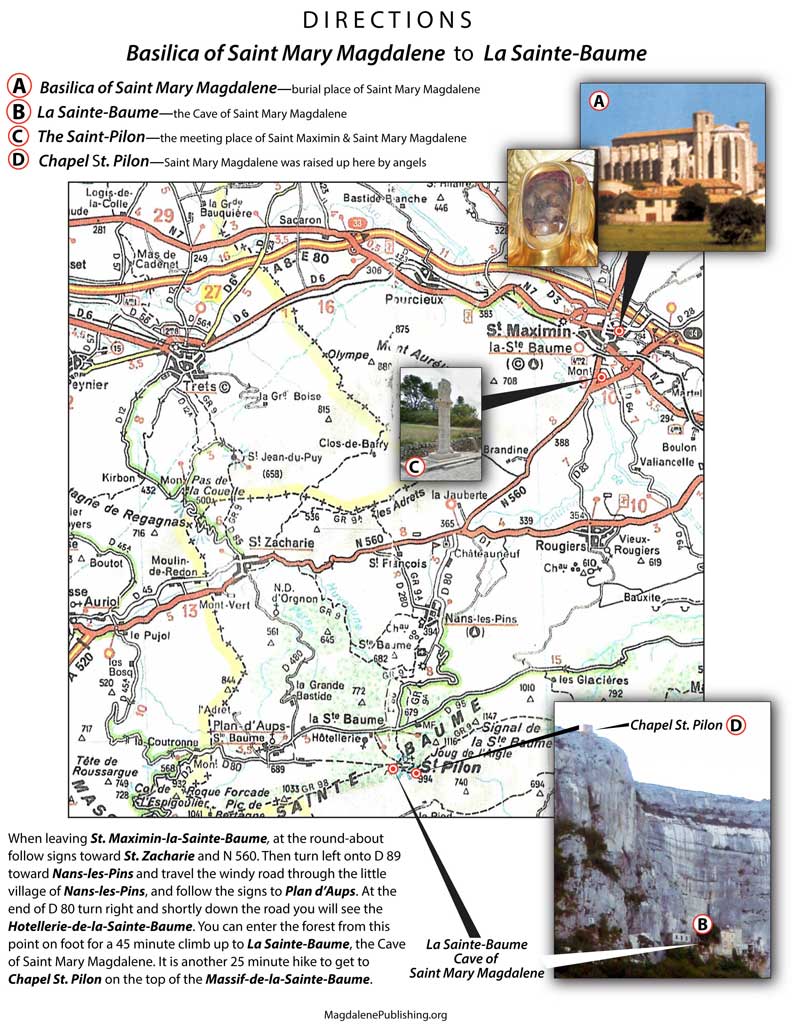 Monday to Saturday from 6 pm to 6.30 pm in the Basilica or in Permanences.

The Saint-Maximin Basilica is the only large gothic church in Provence. In the 13th Century, Provence was a State separate from France, governed by the Counts of Provence.

Louis IX, King of France, canonized in 1297, made a pilgrimage to the Sainte-Baume (Holy Grotto) upon his return from a Crusade in 1254. He was surprised at the lack of affection shone for Saint Mary Magdalene by the Provençal people and by the fact that no trace of her relics could be found. His nephew was Charles II of Anjou, Count of Provence, but also – and especially – King of Naples and Sicily, a title coveted by Spanish Aragon with whom he was at war. It was only in 1279 that a dig began inside the « oratory » of Saint-Maximin.

After the discovery of the corpse of Mary Magdalene and the official recognition of her relics in 1281, Charles II decided, with the agreement and encouragement of Pope Boniface VIII, who published several papal bulls to this effect, to build a sumptuous basilica in honor of Mary Magdalene and to install there the sons of Saint Dominic.

The edification of the church and adjacent convent started in 1295. The plans were drawn by a French architect in the service of the Court of Naples, Master Pierre, perhaps Pierre d’Agincourt. In August 1305, Jean Baudici, builder of the Count’s palace in Aix, took over the remainder and became the master builder of Saint-Maximin.

Construction spans over several periods. The three apses and the first five trusses are achieved in 1345 ; the sixth truss covering the crypt is constructed in 1404 ; the three last ones are finished circa 1525. The central façade and the bell tower, foreseen at the beginning of the south nave, were never built.

The basilica measures 73 meters in length, 37 in width and 29 in height. The church is composed of three naves with neither ambulatory nor transept. If the exterior aspect may seem a bit massive, more a mark of Provençal robustness than of French audacity, the interior is completely different : the visitor is struck by the grandiose architecture, elegant and light, and above all by the luminosity of the ensemble.

La fenestrado baselico, sung by Frederic Mistral, counted no less than sixty-six openings, of which only fourty-four let in the light today. Moreover, among these, across the centuries, a certain number have been partially walled up to keep them water tight. At the start, Charles II had wished to reproduce in Provence his uncle’s « Sainte Chapelle » in Paris. Actually, the pavillon built over the crypt in the 15th Century and demolished in the years around 1800, was called the « Sainte Chapelle. »

Casa Professa Palermo – Church of Saint Mary of Gesu
Palma cathedral – Catedral de Palma de Mallorca
Let nothing disturb you, nothing frighten you. All things pass. God does not change. Patience achieves everything. He who has God finds he lacks nothing: - St Teresa Of Avila