Coming to Yamoussoukro and having the best stay:

Yamoussoukro Basilica of Our Lady of Peace

It is a sanctuary, a place of prayer, recollection, pilgrimage and radiance of the message of Peace: Guard forever the Human Family in Peace, O Our Lady of Peace “. 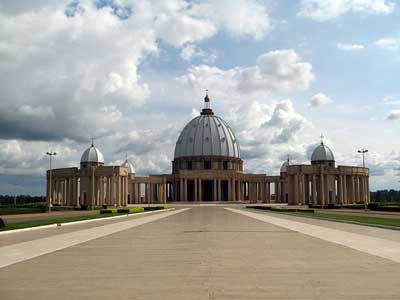 The construction of the Basilica of Our Lady of Peace in Yamoussoukro is the result of a man: President Houphouët-Boigny who wanted to express his faith and his thanksgiving to God in recognition of Côte d’Ivoire long considered as a haven of peace.

At the beginning of the eighties the task of drawing the plans of this Basilica was entrusted to a college of architects including M. Pierre Fakhoury, to whom the Basilica owes the form that we know. The birth of the building was done according to the following timetable: 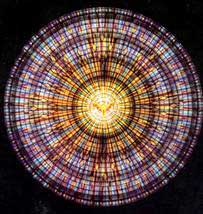 The Basilica of Our Lady of Peace is a sanctuary. The honorary title of “Basilica minor” conferred by the Pope John Paul II, at his consecration on September 10, 1990, also makes it a missionary center of contemplation and pilgrimage. It is a Marian sanctuary that welcomes all those who come to pray to Our Lady of Peace.

Since its opening, the Basilica hosts many pilgrims coming from different horizons and guided by the religious feeling.

The Christian pilgrimage symbolizes the progress of the people of God, led by their pastors, to meet Christ. Christians come to the Basilica in a fraternal approach of conversion and prayer, in communion with the Pope, Bishops and Priests.

This evangelization presupposes a resourcing in the faith, the deepening of an ecclesial consciousness, an approach of personal and collective conversion, the experience of a life in communion. This evangelization thus becomes a testimony for our society and develops the sense of responsibility

On entering the Basilica, one passes under the stained glass window of the Blessed Virgin to which the sanctuary is dedicated, thus recalling the primordial role of Mary in the history of salvation: by her “yes” to the angel, she gave the World the Savior.

The interior of the Basilica is a perfect rotunda. 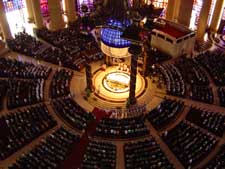 There are twenty-two gates and two chapels dedicated to Our Lady of Peace and Saint Joseph.

The interior of the Yamoussoukro Basilica is still a collection of forty-eight full Doric columns, more than thirty meters high. They run around the sanctuary and rush towards the ambulatory and the dome.

In the interior there are also twelve hollow ionic columns. They hide inside six staircases, cables, the four elevators which allow to reach the ambulatory of the Apostles and the external terraces. 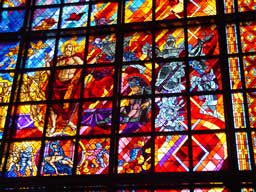 The canopy is made of brass and bronze. Its height is twenty-eight meters. This four-column canopy is also marked by African tradition. Indeed, as in the rainforest, creepers surround the trunks of trees, spirals wrap around the four barrels.

At the top of each of them, the capital rests on a perforated seat, royal Baoulé seat which then becomes the throne of the King of kings: Jesus Christ.

Posted in Africa and Ivory Coast

Guadalajara Cathedral
Augsburg Cathedral of the Virgin Mary in Germany
Let nothing disturb you, nothing frighten you. All things pass. God does not change. Patience achieves everything. He who has God finds he lacks nothing: - St Teresa Of Avila