Special Features of Our Lady of Dolours Thrissur Basilica

The great Maharaja of Cochin, His Excellency Rama Varma issued the sanction to build a big church at Thrissur. He wished at that time that” the New Church must be the biggest church in Asia” The wish of Maharaja was fulfilled in 1940 when the church was blessed by His Ex.Rt.Rev.Dr.Francis Vazhapilly. See more Catholic Shrines and pilgrimages in India 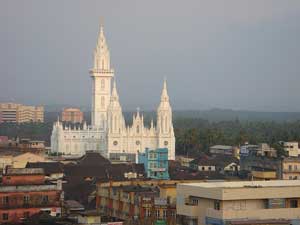 The New church was raised to the status of Minor Basilica on 25th April 1992 by the pope John Paul II. By this honour this church is made the model and example for all liturgical services and administration of sacraments.

On Fridays and Sundays there are fire services in which the faithful are attending lively land actively. As a privilege the faithful is honoured by plenary indulgence by visiting and praying the following days in this Basilica. As a privilege to Basilica papal emblem and flag are placed in front of the main door of the church. See top 15 Catholic shrines in the world.

This Basilica is having three towers in gothic style. Two of them are in front and one is in the back. The front towers are having 146 feet height, while the rear tower is known as Bible Tower. Visitors can go up to the view point either by step or by lift and they can see the panoramic view of Thrissur. See more Catholic Shrines and pilgrimages in Asia

Eight bells, imported from Germany is a specialty of this church. They are producing the seven musical notes. Every day morning and evening ‘Ave Maria’ will be toned together in the Angelus.

Perpetual Adoration Center is a place of solace to the troubled man. Mar Joseph Kundukulam, the late Archbishop of Thrissur started this center and Cardinal Lourd Swamy inaugrated this. Everyday 8.15 a.m to 8.15 p.m there is adoration and Sacrament of confession is administrated from 8 a.m to 7 p.m.

Altars of the Church

As one enters the Church through the massive main door (elephant door) one notices the expansive nave that leads to the main altar. As he steps into the church and looks up, he finds, poised perpendicularly above him on the ceiling, the breath taking beautiful mural painting of the Holy Trinity. On both sides of the naves are a number of rock pillars wrapped in mosaic.

Thousands can participate in the liturgy, occupying the nave, aisles, transepts and the balcony on both sides. The floor of the Church is paved with mosaic bricks and the whole church is gorgeously illuminated with varied varieties of electric lamps.

Categories: Articles Tags: Minor Basilica, Thrissur Basilica
← PreviousNext →
Let nothing disturb you, nothing frighten you. All things pass. God does not change. Patience achieves everything. He who has God finds he lacks nothing: - St Teresa Of Avila