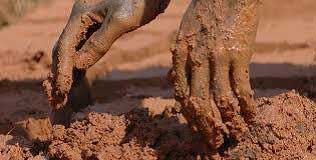 Dear Jesus, You really use creative approaches. Mud on the eyes, a little water – and he already sees! Do you think this will work well for me to? This looks so easy. But You know, it’s not complicated and that the focus is elsewhere. And for this I ask you – for faith, that you know what you wish for me to see.

9 As he went along, he saw a man blind from birth.
6 After saying this, he spit on the ground, made some mud with the saliva, and put it on the man’s eyes. 7 “Go,” he told him, “wash in the Pool of Siloam” (this word means “Sent”). So the man went and washed, and came home seeing.
8 His neighbors and those who had formerly seen him begging asked, “Isn’t this the same man who used to sit and beg?” 9 Some claimed that he was.
Others said, “No, he only looks like him.”
But he himself insisted, “I am the man.”

The Pharisees Investigate the Healing

13 They brought to the Pharisees the man who had been blind. 14 Now the day on which Jesus had made the mud and opened the man’s eyes was a Sabbath.15 Therefore the Pharisees also asked him how he had received his sight. “He put mud on my eyes,” the man replied, “and I washed, and now I see.”
16 Some of the Pharisees said, “This man is not from God, for he does not keep the Sabbath.”
But others asked, “How can a sinner perform such signs?” So they were divided.
17 Then they turned again to the blind man, “What have you to say about him? It was your eyes he opened.”
The man replied, “He is a prophet.”
34 To this they replied, “You were steeped in sin at birth; how dare you lecture us!” And they threw him out.

4. Thoughts on the Gospel

In the next moments of silence, I talk about of this with Jesus. I tell him what I think, what I feel, what I want. I ask him for the grace that I need for … (make your conversation with God)

Perhaps from this silence I hear God’s speech, which invites me perhaps in thanksgiving and worship, or to open myself and accept him in my path life and work, maybe He gives me the courage to continue searching for…

When I walk into a personal relationship with God, he changes me, makes me more loving and encourages me to the concrete action, which is….. (write down your insights for concrete action)

Father, we are in the middle of Lent. Sometimes is quite difficult to stand… Sometimes I am afraid what you are showing me and I throw it out because it is not my way. I ask for the grace to feel your love, which is patient with me and invites me to the fountain to wash and get the courage and the voice to life.

Lectio divina meditations are published and adapted with permission from the Jesuits home  – ignacijevdom.si.