On the last Sunday of September, every year the Mellieha Sanctuary Feast is held, as a commemoration of the coronation of the painting of Our Lady of Mellieha in 1899.

The Sanctuary of Our Lady of Mellieha is a part of European Marian Network, amazing 21 Marian Pilgrimages and Shrines. 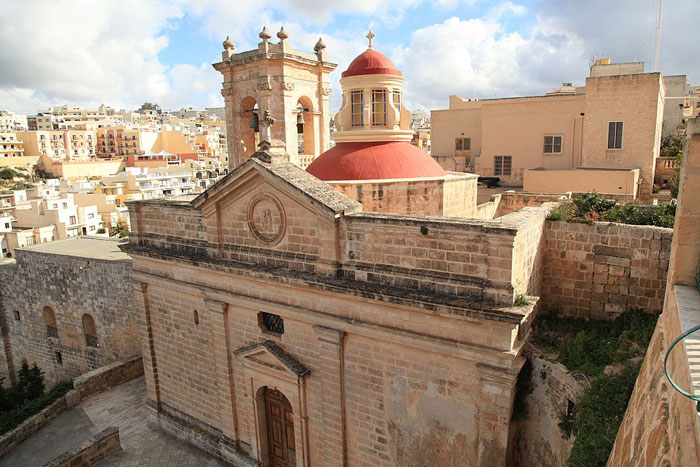 The building on top of the Sanctuary of Our Lady of Mellieha is the Parish Priest’s Residence. The oldest part of the building was presumably once a small monastery traditionally attributed to the Agostinian Friars, who for several years took care of this Marian Shrine.

The door on the left leads to the sacristy. The cavern was excavated wound 1610 by Mario de Vasi, a Sicilian wine merchant who contributed as well for the decoration of the grotto’s vault and the erection of the statue of Our Lady of the Grotto.

The sacristy contains an impressive collection of ex-voti, gifts and pledges, all of which demonstrate the great devotion the Maltese have towards Our Lady.

The Monumental Arch was built in 1719, so as to commemorate the favours obtained from Our Lady of Mellieha after a long period of draught. The inscription on the Arch reads: “In thee have fathers hoped. they have hoped and thou host delivered them”.

The Crypt of Our Lady of Mellieha was originally one of the many natural caves found around the northern part of the island. According to an old tradition, the Byzantine style fresco, depicting the Vergin Mary holding Christ on her right arm, was painted by St. Luke, when he was shipwrecked on the island together with St.Paul.

Recent studies indicate that the fresco is an Early Medieval 13th century painting.

The ancient part of the Sanctuary, as it stands today, dates back to the late 16th century. Since then, due to the popularity of the place and the ever increasing population of Mellieha the chapel’s internal structure was modified and extended several times, the major works being done in 1716-19, 1815 and 1845-47.

In 1844 the Rector and later Parish Priest of Mellieha Dun Pawl Le Brun, the Sanctuary regained its status of a parish church and in 1899 the miraculous painting was coronated by Archbishop Pietru Pace. 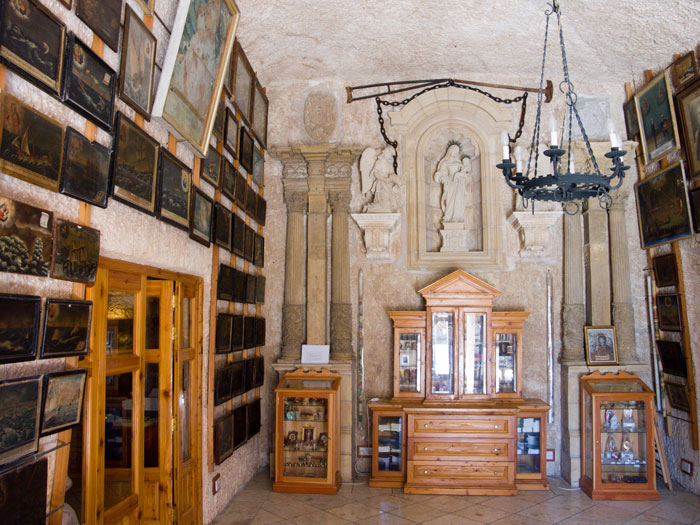 The Sanctuary’s clock was fabricated by Mikelang Sapiano from Imqabba in 1875. All the expenses were paid by the British Government.

From under the roofed verandah, a classic example of 17th Century Renaissance architecture, one can enjoy a picturesque view of the Valley of Our Lady, Mellieha Bay, Comino and Gozo. The rooms facing the chapel were originally contracted in the 18th century to host exhausted pilgrims.

Behind the iron grating, there lies a old statue of St. Anne, probably made by a devotee of Our Lady of Mellieha. In the chapel’s facade there is as well a statue of St. Paul, which was constructed later in the 19th century.

On the last Sunday of September, every year the Mellieha Sanctuary Feast is held, as a commemoration of the coronation of the painting of Our Lady of Mellieha in 1899.

The Sanctuary of Our Lady of Mellieha is a part of European Marian Network, amazing 21 Marian Pilgrimages and Shrines.

Posted in Europe and Malta

Reflection John 4:5-42 – Jesus and the woman at the well – Lectio Divina

What happens if you drink Holy Water? And how to use it properly with faith!

Beautiful Medjugorje Novena to pray for peace and reconciliation

Novena to the precious blood of Jesus Christ

Novena to the Holy Spirit in the Divine Mercy Łagiewniki Shrine

Parable of the Unmerciful Servant – The two logics: the God’s merciful and the man’s calculating.

Jesus appearance to Thomas and His Disciples – What can I learn from Thomas for my life?

On the Road to Emmaus – Where and when do I run away in the relationships?

“Take my yoke upon you.” – Yoke is not carried by only one single, but is placed on two necks. Mine and of Jesus! Matthew 11:25-30 Commentary

Mary, Our Lady undoer of knots Novena and Prayer – Bring your knots to Blessed Virgin Mary

What is St Bernadette the Patron saint of?

San Damiano Cross is speaking to us also! Detailed explanation of the images and their meaning

The Fulfillment of the Law – Matthew 5

Beautiful Fatima Prayers taught by the Angel and Our Lady

3 o clock prayer – Hour of Mercy – What should we pray?

Jesus promises the Power of the Holy Spirit and What are Jesus commandments? John 14, 15-21 Commentary

Get the confirmation names for girls and boys in one place!

How to make a good Confession? With detailed guide for the Examination of Conscience for Confession