If you are in Munich, the the time to visit the late Baroque Asam Church is located on Sendlingerstraße just a few minutes’ walk away from the Sendlinger Tor (Sendling Gate).

It was erected between 1733 and 1746 by the Asam brothers and bears the official name of St. Johann Nepomuk. Originally planned as a private church for the builder, its Baroque facade is integrated into the row of houses on Sendlingerstraße.

Two massive rocks arise from the base of the columns at the entrance. The luxuriously furnished interior breaks from Baroque convention with its proportional distribution.

Cosmas Damian Asam and Egid Quirin Asam were among the most important artists who helped shape the cityscape of Munich. While Cosmas, like the father, was engaged in the art of frescos, Egid worked as a sculptor.

Together they complemented and shaped the Bavarian Baroque. When Egid acquired some houses in Sendlinger Strasse, he built his own home there. Next to this, the Asamkirche was to be built, consecrated to St. Nepomuk.

The highlight for Egid Quirin Asam: From the window of his bedroom he looked directly at the high altar. As a private church, planned only for oneself, it should act as a personal work in honor of God and thus secure the soul of the brothers. The church and the population did not like such ambitious plans.

It was only after a long time that the brothers were given permission to build the church. Before, however, they had to guarantee access to the population.

In the construction of the church, the brothers had no limits. After all, they were the builders themselves. They did not have to restrict themselves by prescriptions. This is proved by the exuberant pomposity inside and a few peculiarities.

For example, the church is oriented to the west instead of to the east, and the cross opposite the pulpit hangs deeper than usual. In 1746 the church, which was still incomplete, was inaugurated.

Egid’s brother had now passed away and he himself followed only four years later. The actual completion of the church was therefore denied to both brothers. 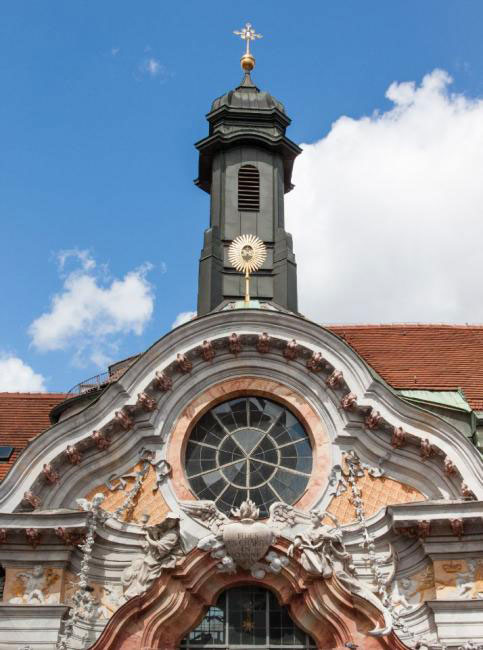 Timeline of the Asam Church – Asamkirche

The Asamkirche is a place of silence and prayer in the middle of the busy pedestrian zone. 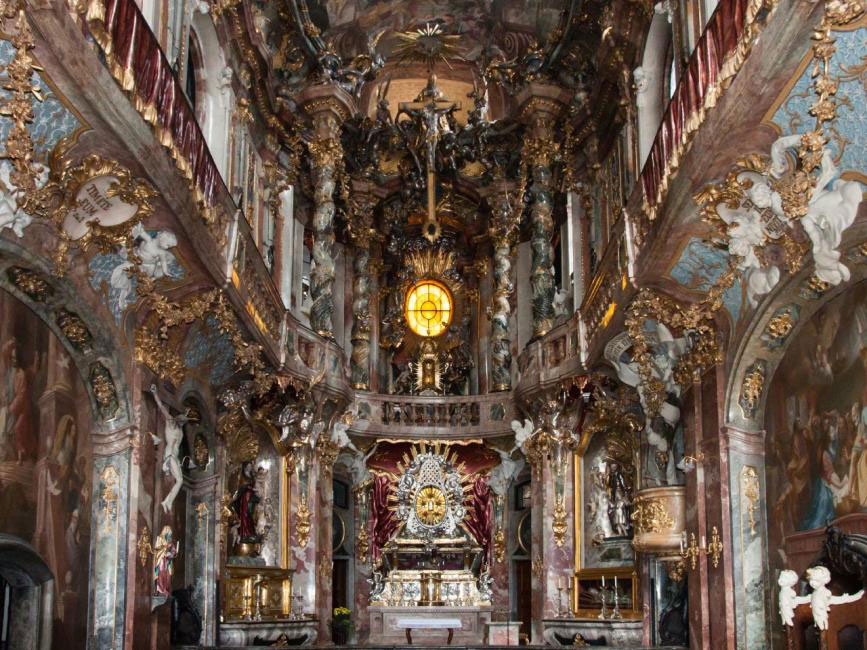 Through a powerful wooden door, decorated with four reliefs and two golden, star-shaped decorations, one enters into the small church.

At just 22 x 8 meters of area, the Asam brothers managed a masterpiece. With its excessive number of ornaments on such a small surface, the interior of the church is overwhelming.

The lighting concept of just 22x8m interior is divided into three parts. The lowest range was created for the people, and symbolizes the “suffering of the world” with its dark colors.

The seating area of the Emperor is located in the second section and is decorated in blue and white colors. The higher rank with the elaborate ceiling paintings are a symbol of God.

Another special feature of the Asam church is its orientation to the west rather than the east. During the Baroque period, it was also common for the cross opposite the pulpit particularly high to install, as an expression of submission to Jesus.

Their artistic abilities immortalized the Asam brothers also right next to the church, in the Asamhaus. The four-storey facade is decorated with elaborate stucco work.

They gracefully wove between the windows, shining in brilliant white on a yellow background. The filigree design makes it clear that both brothers were masters of their arts. They owe this to their apprenticeship at the Accademia di San Luca, where they were students of the Italian master, Lorenzo Bernini. 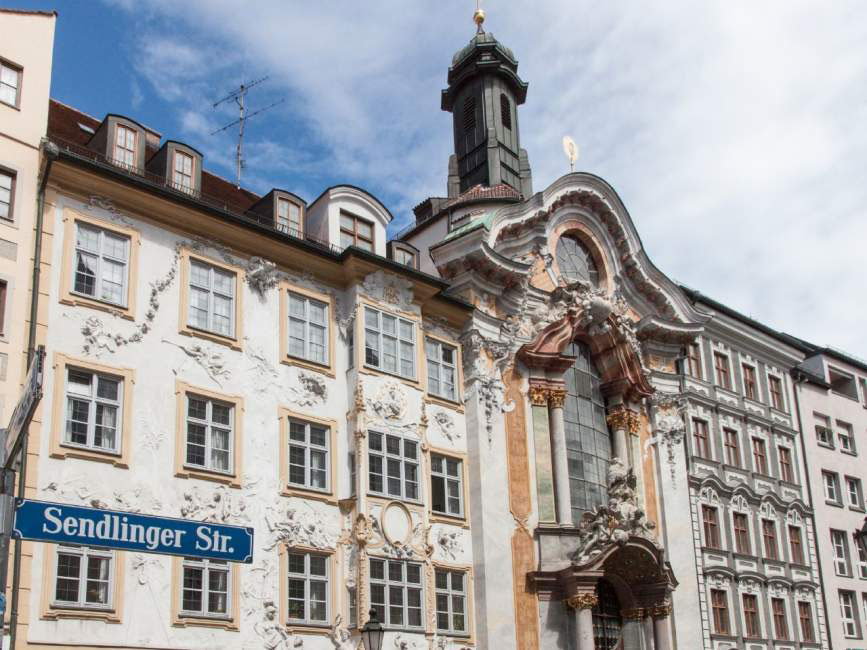 Why did the Asam brothers consecrated the church in the Sendlinger Straße to the Saint Nepomuk?

There are different views. On the one hand, Nepomuk was the protector of the Electorate of Bavaria, on the other hand the foundation was laid on the name day of John of Nepomuk.

A legend, tells of a trip on the Danube to Kloster Weltenburg. The brothers wanted to transport valuable sculptures by the ship. A storm, however, made the journey a hell of a step.

In their fear of capsizing, the brothers called to John of Nepomuk. He had been sanctified in 1729 and had been regarded as a patron of bridges, cities and other structures that were to be protected from water damage.

After the two had begged Nepomuk for their protection, their ship was spared from a disaster in the waters of the Danube.

Directions to the Asam church

The Asamkirche is a place of silence and prayer in the middle of the busy pedestrian zone.

Timeline of the Asam Church – Asamkirche

Posted in Europe and Germany

Antwerp Cathedral of Our Lady with magnificent four Rubens paintings – Mass times and Opening hours
Wieliczka Salt mines Krakow and the extraordinary Saint Kinga’s chapel with Salt Chandelier and Altar
Let nothing disturb you, nothing frighten you. All things pass. God does not change. Patience achieves everything. He who has God finds he lacks nothing: - St Teresa Of Avila