Home » Articles » The Story of Statue of Our Lady of Fatima, Portugal – History and Description

The Story of Statue of Our Lady of Fatima, Portugal – History and Description 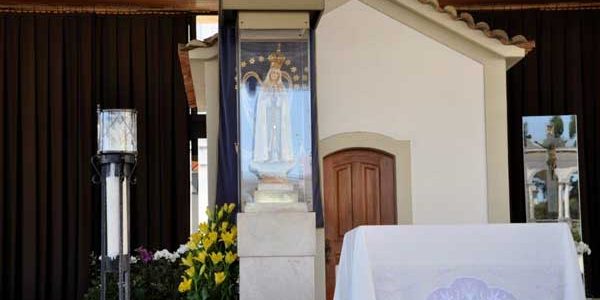 The sculpture of Our Lady of the Rosary of Fatima, worshipped at the Little Chapel of the Apparitions, is one hundred years old and to mark this centenary the Shrine of Fatima is holding an exhibition entitled “Dressed in White”, which on the 13th in¬cluded this Statue for a few hours.

Statue of Our Lady of Fatima – The sculpture, which became one of the most well-known and replicated Marian icons all over the world, was commissioned in 1919 by a devotee from Torres Novas, Gilberto Fernandes dos Santos, to Casa Fanzeres, in Braga.

Sculpted by the saint maker Jose Ferreira Thedim, inspired by a statue of Our Lady of Lapa, worshipped in Ponte de Lima, the Statue was modeled and carved according to the account of the seers, just as it was transmitted by Canon Manuel Forrnigao.

The statue is 1.04 meters high and is made of Brazilian cedar. Casa Teixeira Fanzeres, from Braga, applied the poly¬chromy and gilt. The eyes are made of glass and the garments and mantle are embedded with rock crystals, glass, and diamonds.

The golden crown, worn by the statue only on days of great pilgrimages, was of¬fered by the women of Portugal, on 13 Oc¬tober 1942; it weighs 1.2 kg and has 313 pearls and 2 679 precious stones. In 1989 the bullet extracted from the body of John Paul II, after the attempted assassination in Rome, was encased in the crown. 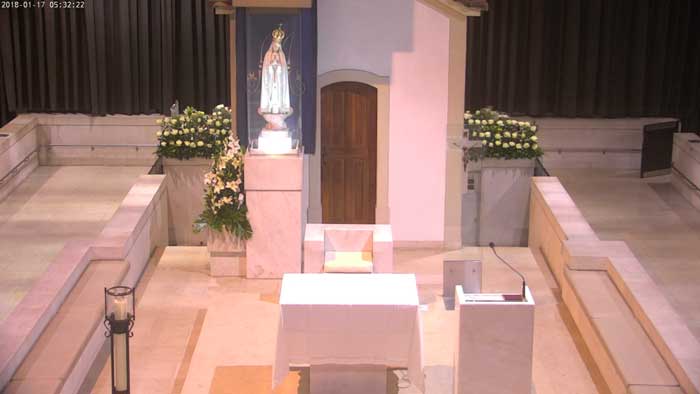 The Statue, still without the crown, arrived in Fatima on May 1920 and was consecrated on May 13 1920 by the priest of Fatima, Fr. Manuel Marques Ferreira, at the Parish Church, having been taken to the Little Chapel of the Apparitions only one month later, because at the time the religious demonstrations were forbidden by the Republican Regime.

Every night the Statue was taken away by the keeper Maria Carreira — known as Maria of the Little Chapel — and for this reason, it escaped safe and sound to the bomb attack of March 6, 1922, which par¬tially destroyed the Little Chapel.

From May 1982, with the renovation of the Little Chapel of the Apparitions in time for the first visit of John Paul II, the statue stands outside the Little Chapel in a plinth, in the exact spot of the original holm-oak (gone by now, due to the action of the faithful) above which Our Lady ap¬peared to the three Little Shepherds.

This Statue usually doesn’t leave the Little Chapel on August 15 and December 8, as well as the night of the 12 and 13 of the great international anniversary pilgrim¬ages, from May to October, although the Statue has already left the Shrine 12 times, most of the times at the request of several Popes.