The Regensburg Cathedral of St. Peter is the spiritual heart of the diocese. It’s faith that has become a stone, which for centuries characterises the lives of men. It is the most visible center of the city of Regensburg and an outstanding testimony of the Gothic in Bavaria.

Though the cathedral contains remnants of Romanesque architecture and its 17th century renovations incorporated some Baroque elements, it remains predominately a Gothic structure. Traces which have lingered from the structures medieval period are a collection of stone sculptures and stained glass windows. 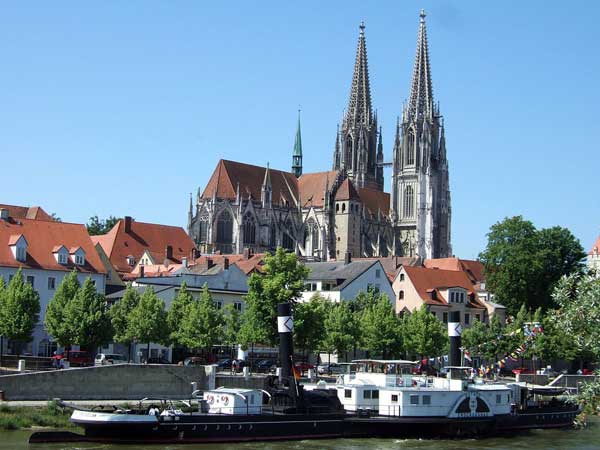 A bishop’s tomb was built in 1984 and is the cathedral’s most recently constructed feature. The immense task of cleaning the exterior was recently undertaken, and is now open to visitors every day.

If you are looking for the organ, you should look up the north wall of the transept in the St. Peter’s Cathedral. Majestically, the organ hangs there over one of the important canopied altars.

The Dome organ is deliberately presented as a testimony of our time, but without being perceived as a foreign body in the Gothic cathedral.

See hotels near the Regensburg Cathedral

The cathedral treasure – Domschatz museum – is located in the historical rooms of the former episcopal residence with Renaissance frescoes. The museum shows treasure chamber pieces of the Middle Ages and modern times. Regensburg is a prominent center of goldsmiths until the 18th century.

Why the most prestigious guild of the Middle Ages was so appreciated and why faith and craftsmanship were inextricably linked, can be experienced in the cathedral treasures of extraordinary exhibits. In addition to the high-quality goldsmiths – precious crucifixes, monstrances, cups and bishop stones – robes are to be seen in the finest gold embroidery.

Even today, the sacred devices and paraments exhibited stand out in their liturgical tradition and are used for special occasions during worship in St. Peter’s Cathedral.

Opening hours and prices for the treasure museum

The colorful windows of Regensburg Cathedral tell many stories. They come from different times:
Most of the very valuable color windows were created between 1220/1230 and 1320/1370.

The windows in the Westfassade have only been added 150 years ago. From more recent times (1967/1968) are the colored glass windows in the left secondary choir. They are from Professor Josef Oberberger, who also created the Pentecost window in the western part of the northern crossship at the end of the domestication.

Also created by Professor Josef Oberberger were the new windows, which in the sense of the gothic only let light.

Many stone figures can be seen in Regensburg Cathedral. The Mary and the “Laughing Angel” are particularly striking in the western quartering arrows (by the Erminold master, around 1280).

On the eastern quarter, the stone figures of St. Peter (on the left) and Paul (on the right), about 1320 and 1360/1370 stand respectively. Also worthy of note are the two horse statues at the Westportal (Martin and Georg).

See hotels near the Regensburg Cathedral

The five gothic ciborium altars, which have been preserved as a special feature in the Cathedral of Regensburg, are particularly noticeable. In front of the High choir, the view leads to the sumptuous silver high altar, which comes from Augsburger artists and has grown over the course of almost 100 years between 1695 and 1785.

The Regensburg Cathedral as the last resting place

Bronze monument to Prince Cardinal Philipp Wilhelm in Regensburg Cathedral. In the cathedral of Regensburg, important bishops have found their last stay:

The Regensburg Cathedral had several predecessors. Its present form was the Gothic building in many construction sections:

Worship services on Sundays and holidays:

Posted in Europe and Germany

Santa Maria della Salute basilica in Venice
Cathedral of St John the Baptist in Savannah
Let nothing disturb you, nothing frighten you. All things pass. God does not change. Patience achieves everything. He who has God finds he lacks nothing: - St Teresa Of Avila