Coming to Strasbourg and having the best stay:

Insurance: Travel Insurance for France, Europe
Flights: Flights to Strasbourg
Things to do: Sightseeing in Strasbourg
Forum: FAQ about Strasbourg and getting around
Cars: Rent a car
Rail Europe: Train to Strasbourg
Books: Travel guides and maps
UNESCO: Woirld heritage site – Grande-Île, the historic centre of Strasbourg, structured around the cathedral.

Notre Dame Strasbourg Cathedral or the Cathedral of Our Lady of Strasbourg also known as Strasbourg Minster, is a Roman Catholic cathedral in Strasbourg, Alsace, France. It is widely considered to be among the finest examples of high, or late, Gothic architecture.

Described by Victor Hugo as a “gigantic and delicate marvel”, and by Goethe as a “sublimely towering, wide-spreading tree of God”, the cathedral is visible far across the plains of Alsace and can be seen from as far off as the Vosges Mountains or the Black Forest on the other side of the Rhine. Sandstone from the Vosges used in construction gives the cathedral its characteristic pink hue. 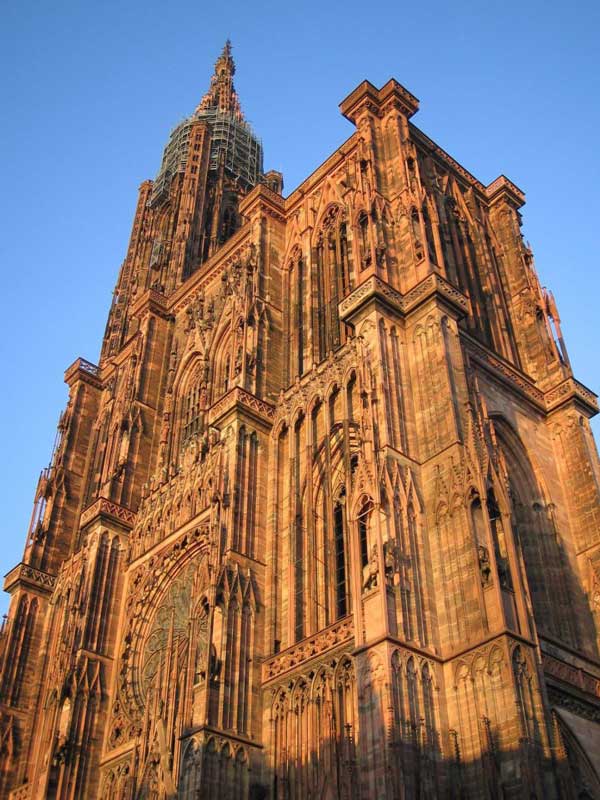 The Notre Dame Strasbourg Cathedral stands on the exact site of a roman temple built on a little hill above the muddy ground.

The first version of the church was starting to be built during 1015 by proposal of Bishop Werner von Habsburg, but fire destroyed most of the original Romanesque building. See Top 15 Catholic shrines in the world. See other Catholic sites in France.

By the time that cathedral was being renovated (at the end of the 12th century, this time with red stones carried from the nearby mountains of Vosges), the gothic architectural style has reached Alsace and the future cathedral was starting to develop all characteristics of gothic aesthetics.

The project of the first cathedral in Alsace was handed to craftsman and stonemasons who had already worked on the also famous gothic cathedral in Chartres.

The known dimensions of the Notre Dame Strasbourg Cathedral

The cathedral’s south transept houses an 18-metre astronomical clock, one of the largest in the world.

Its first forerunner was the so-called Dreikönigsuhr (“three-king clock”) of 1352-1354, located at the opposite wall from where today’s clock is.

Then starting in 1547 a new clock was built by Christian Herlin, and others, but the construction was interrupted when the cathedral was handed over to the Roman Catholic Church.

Construction was resumed in 1571 by Conrad Dasypodius and the Habrecht brothers, and this clock was astronomically much more involved. It also had paintings by the Swiss painter Tobias Stimmer.

That clock functioned into the late 18th Century and can be seen today in the Strasbourg Museum of Decorative Arts.

The clock existing today originated in 1838-1843 (the clock has 1838-1842, but the celestial globe was only finished on June 24, 1843) and was built by Jean-Baptiste Schwilgué in Dasypodius’ clock case, and with roughly the same functions, but equipped with completely new mechanics.

Schwilgué made a number of preliminary studies years before, such as a design of the computus mechanism (Easter computation) in 1816, and built a prototype in 1821.

This mechanism, whose whereabouts are now unknown, could compute Easter following the complex Gregorian rule.

The Notre Dame Strasbourg Cathedral has many other treasures 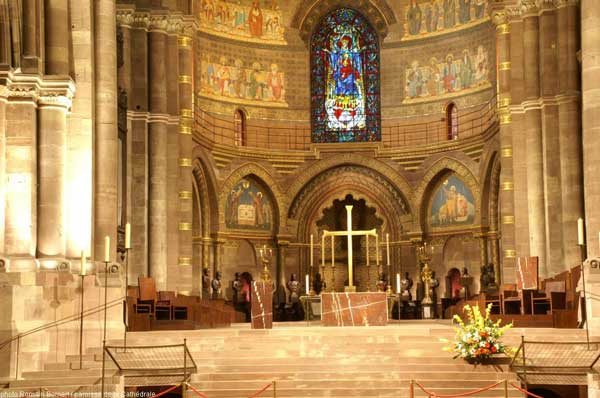 The presence of an organ is attested as early as year 1260. There was also two other instruments built and modified in 1291 and 1327.

The oldest sections of the actual organ case are not older than 1385. The bird’s nest was built in the same period. It is built in fir and is hung from the wall by a very large vertical oak beam down to the Samson’s statue.

To the right, the mobile character depicting a pretzel dealer was the famous Rohraffe (crying monkey) who, with his arm and head, punctuated the insults shouted by a cathedral’s servant hidden in the loft during the procession on Pentecost Sunday.

The city herald’s right arm (on the left) and the lion’s mouth are also mobile. 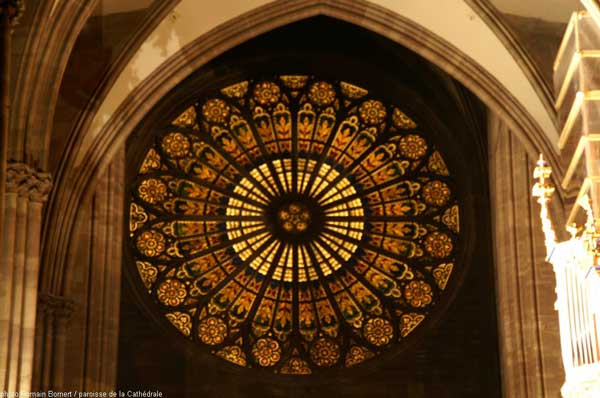 The famous tower was once almost completely destroyed during the French Revolution, inspired by anti-religious believes, some revolutionary leaders ordered its demolition. But, a local locksmith conceived a brilliant scheme of making a huge Phrygian cap made of metal to cover the tower.

The bomb shelling of 1870 and 1944 caused some damage of the Cathedral, but after few renovations and the replacements of missing statues, the Cathedral regained its original look.

The known dimensions of the Notre Dame Strasbourg Cathedral

The Astronomical Clock
Parade of the Apostles every day at 12.30 p.m.

Entrance:
At the north doorway (parking side) starting from 11.20 am

Going-up on the Cathedral Platform
(332 steps)

As far as possible, takes place daily (except on Sunday and Holy Days) from 4 pm to 6 pm. Please come to the sacristy (north transept).

Every Tuesday, in July and August, the Cathedral is open for silent worship from 20.30 to 21.30 (no sightseeing).