Construction of the magnificent Gothic the Barcelona Cathedral commenced on 1 May 1298, on the site of a Romanesque temple. The work was carried out in three stages over 150 years. As is true for many religious buildings, construction had to move at a slow pace.

The main façade was raised at the end of the 19th century, while the 90-meter high cimborio went up in 1913. In 1969 the blackened domes were cleaned, the altar adapted, illumination installed and the archives were renovated. These actions were carried out following the guidelines established in Vatican Council II. The façade and cimborio were restored between 2004 and May of 2012; that work has not yet been completed and includes restoration of the rooftops and the bell tower. See also Basilica of the Sagrada Familia in Barcelona.

Cathedral receives three million visitors each year. The magnificence of its Gothic art, the splendid Gothic and Baroque altarpieces, its marvelous choir, the baptistery and the sepulcher of Saint Eulalia are evident to all observers.

The crypt of Saint Eulalia is beneath the high altar. It was constructed at the beginning of the 14th century by the architect Jaume Fabré. See more European Catholic Shrines and pilgrimages 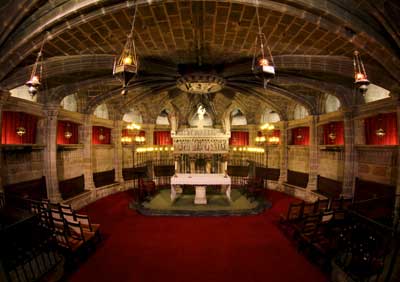 The crypt of Saint Eulalia

The crypt conserves the ancient sepulcher of Saint Eulalia, vvirgin and martyr from the 4th century. There is also an exceptional polychromed, alabaster Gothic sarcophagus containing the remains of the Saint. More Catholic shrines and Basilicas in Spain.

The facade of the Barcelona Cathedral

The facade of the Cathedral is in the neo-Gothic style and was created by the architect José Oriol Mestres between 1887 and 1890 under the patronage of the banker Manuel Girona.

The main door is situated at the center of the façade. It is made up of a large Gothic arch with archivolts. The mullion is presided over by a stone sculpture of Christ, while images of the twelve apostles are situated along the sides of the door and 76 other figures representing kings, prophets, angels and saints. The sculptures were made by Agapito Vallmitjana and Juan Roig. 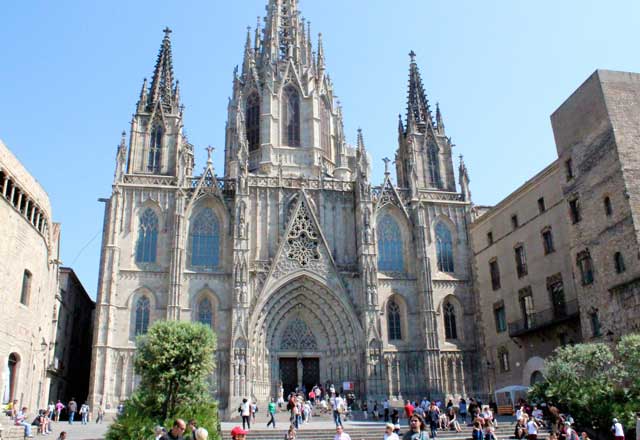 There are eight stained-glass windows on the façade, some are modernist and others from the Renaissance, like the famous Noli me tangere by Bartolomé Bermejo.


The two side towers with tall pinnacles were added between 1896 and 1898. The Cathedral’s cimborio was constructed between 1906 and 1913; crowned by the image of Saint Helena, it is the work of the artist Eduard Alentorn. Work on the cimborio was completed under the direction of the architect August Font and the patronage of the Girona family.

The Cathedral’s altar is made of white marble and is three meters long. It rests on two capitals dating from the 6th century, which were originally in the paleo-Christian Cathedral. This altar was consecrated in 1337 by Bishop Ferrer Abella. 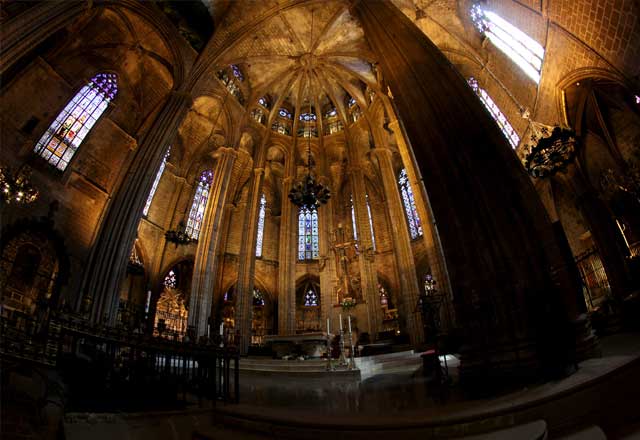 Behind the altar, in the middle of the central columns, is an image of the Exaltation of the Holy Cross surrounded by six angels, work of the sculptor Frederic Marés (1976). At the base is a seat cut from alabaster in the mid-14th century. The wooden seatback is from 1967.

Construction of the Cathedral’s choir started up in 1390 under the mandate of Bishop Raymond d’Escales. The stalls are one of the most significant sculptural works in the Catalan Gothic style. The canopies and pinnacles were made by the sculptor Michael Lochner and his disciple Johan Friedrich at the end of the 15th century. The commemorative shields painted by Juan de Borgoña on the choir stalls date from 1517-18 and relate to the knights of the order of the Golden Fleece who were convoked by their Master, the Emperor Charles V, to meet in Barcelona in 1519. 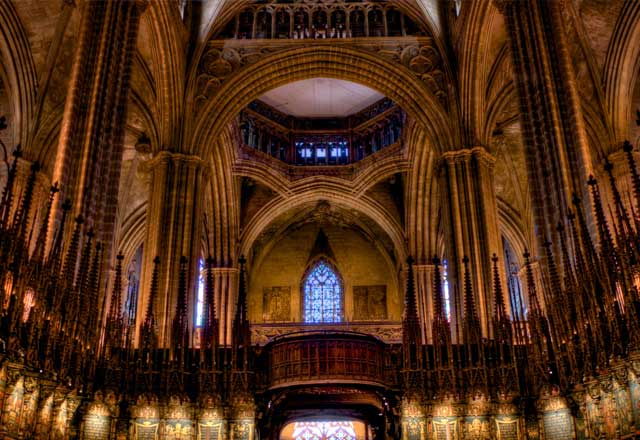 At the entrance to the choir on the right is the wooden pulpit carved by the sculptor Pedro Çanglada in 1403.

The retrochoir was commenced in 1519 by the sculptor Bartolomé Ordóñez. It is a Doric colonnade crowned by a balustrade. Between its columns are four scenes sculpted in relief of the life of Saint Eulalia, two on each side of the door, and at each end are recesses with free-standing sculptures.

The Chapel of the Holy Sacrament and of the Holy Christ of Lepanto was constructed by Arnau Bargués in 1407.

It was the Chapterhouse of the The Barcelona Cathedral until 1676, when Saint Olegarius was canonized and the room became his mausoleum. 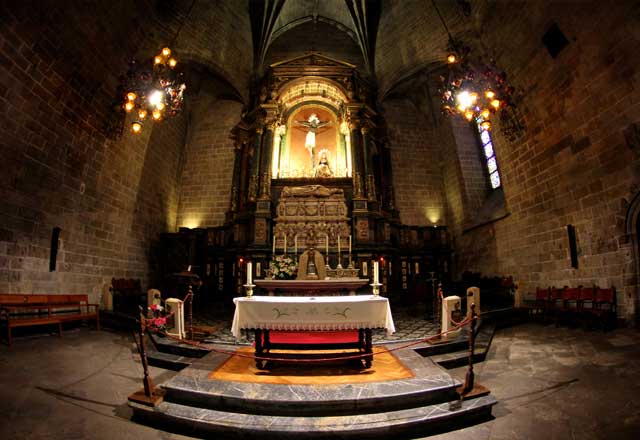 The Chapel of the Holy Sacrament has a rectangular floor plan, covered by a great star vault. The central keystone of the chapel represents the Pentecost and was created by the sculptor Joan Claperós in 1454.

Inside the chapel is the Baroque sepulcher of Saint Olegarius – bishop of Barcelona – and, above that, the Holy Christ of Lepanto dating from the 16th century.

The Museum of the Barcelona Cathedral is located under the gallery of the Cloister, next to the chapel dedicated to Saint Lucia. Originally, it was the site of a soup kitchen for the poor.

Of special interest within the Museum’s collection are the 11th-century lobed baptism font from the former Romanesque temple and the terracotta sculpture of Saint Eulalia by Anthony Claperós, from the pediment over the door of Saint Eulalia.

There are also paintings such as the Gothic altarpiece of Saint Bernardino and the Guardian Angel (1465-1470) by Jaume Huguet, and the Pieta, (1490) painted on a wooden panel by Bartolomé Bermejo, also known as the Pieta of Canon Desplà. Another significant piece is the monstrance, from the late-14th century, made up from the campaign throne of King Martin the Humane.

It includes entry to the Cathedral floor and the cloister.

Includes a visit to:

The Cathedral floor and cloister
The roof
The choir with the golden fleece choir stalls
The Chapter Hall Museum
The Saint Christ of Lepanto’s Chapel
Includes information brochure
• Individual: 7 €
• Groups: 5 € per person

SUNDAYS AND HOLIDAYS (at the High Altar)

SATURDAYS AND EVES OF HOLIDAYS

Chapel of the Holy Sacrament – Holy Christ of Lepanto

SATURDAYS AND EVES OF HOLIDAYS

Thursdays (except for eves and holidays):

The Cathedral of Barcelona is comprised of three naves, but just a single apse and ambulatory. The naves have five sections: that closest to the façade is the longest in order to accommodate the dimensions of the cimborio, which is adjacent to the main entrance.

The typical structure used in Catalan Gothic constructions, arranged to permit use of the spaces within the buttresses, allowed rows of secondary chapels to be opened up in the Cathedral. There are two chapels in each section of the naves, encircling the entire basilica.

Two large bell towers are located at the ends of the section nearest to the presbytery, with no side chapels. One of the towers is over the door of Saint lvo and the other is over the interior entryway to the Cloister. On the basilica’s terraces, these towers are octagonal with a prismatic body used for the stairways, which are built into the towers (1386-1393 and 16th century).

Large windows open up onto the radial chapels of the ambulatory, illuminating the presbytery. In the lateral naves, a tall, windowed gallery runs above the chapels on the outer wall of the basilica. A small triforium runs around the central nave and the presbytery near the dome.

Posted in Europe and Spain

Beauvais Cathedral of Saint Peter
National Basilica de Lujan and Virgen de Lujan in Argentina
Let nothing disturb you, nothing frighten you. All things pass. God does not change. Patience achieves everything. He who has God finds he lacks nothing: - St Teresa Of Avila