St. Michael’s Cathedral in Cluj Napoca is one of the oldest and most appreciated Transylvanian monuments of gothic architecture.

It stands majestically in the very heart of the town and was built between 1350 and 1487, probably immediately after the settlement had officially become a town, in 1316. The altar is the oldest part of nowadays’ building, dating back to 1390 and measuring 24 meters.

The latter measures 80 m, together with the 4-meter high cross. The nave of the cathedral is 50 meters long and the walls – 10 meters high. 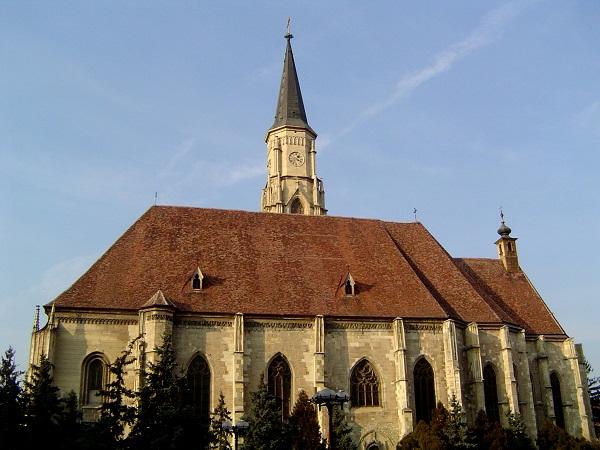 The inside painting of the church is lost, however the restorations of the church revealed some very old and artful frescoes, dating from the XIV-XVth century. They seem to have been destroyed in the period when it belonged to the Protestants, as they are known for their preference for bare walls.

Yet the Sleunig chapel under the tower hosts a XVth century beautiful fresco, “Golgotha”. Priest Biro Janos redecorated the church. The pulpit became baroque, with golden adornments, sculptures and bas-reliefs and the statue of archangel Michael on the top of the pulpit crown.

See our list of top 15 Catholic shrines around the world.

The exterior walls of the cathedral bear the traces of mediaeval graffiti. The decorations of the main gate date back to 1419 and contain three coat-of-arms, belonging to the reign of king Zsigmond: the coat of the Roman-German Empire, the Hungarian one in the right, and the Czech one in the left. 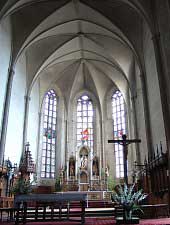 The church is well preserved, as it was professionally restored between 1956-1963. The chapel under the tower also hosts a crucifix, the art of wok of Fadrusz Janos, the sculptor of the statue of Matei Corvin, the statue flanking the cathedral.

How to get to Cluj Napoca

The Cluj-Napoca International Airport (CLJ), located 9 kilometres (5.6 mi) to the east of the city centre, is the third busiest airport in Romania, after Bucharest’s OTP and theTimișoara airport.

The Cluj-Napoca International Airport (CLJ), located 9 kilometres (5.6 mi) to the east of the city centre, is the third busiest airport in Romania, after Bucharest’s OTP and theTimișoara airport.

The church was built during two phases: the first one between 1316-1390 and the second one between 1410-1487. The altar was finished in 1390. The structure was erected on the ground of a former graveyard belonging to a chapel in honor of St. Jacob.

The church belonged to several religious communities: it used to be a Lutheran church between 1545-1558, a Calvin one between 1558-1566 and a Unitarian for 150 years starting with 1566. Afterwards the church went into the property of the Roman-Catholic community and was restored within the frames of the baroque style. Matia Corvin was baptised inside this church. It was here as well, where queen Isabella turned over the hungarian royal insignias. Their receiver was the emperor Ferdinand Ist. Transylvanian princes, such as Sigismund Bathory, Sigismund Rakoczi, Gabriel Bathory and Gabriel Bethlen named as such inside this cathedral. The Transylcanian prince Ștefan Bocskay was layed to rest inside of it.

The gothic main entrance was carved in 1444. It ends upon a high arch, presenting the carved image of St. Michael upon its central part. The Schleunig chapel was built on the cathedral’s south-western corner. It is also dedicated ot the archangel Michael. The ogive shaped ceiling keeps the chapel’s most valuable wall paintings. The chapel was named after Gregorius Schleunig.

Posted in Europe and Romania

Almada Portugal and the Shrine of Christ the King
Brezje Slovenia – National Shrine Mary Help of Christians
Let nothing disturb you, nothing frighten you. All things pass. God does not change. Patience achieves everything. He who has God finds he lacks nothing: - St Teresa Of Avila