Salzburg Cathedral dominates the historical centre of the city with its prominent, two-towered facade and mighty structure. The baroque sites that surround it form a unique stage used for festivals and recognised by UNESCO as a World Heritage Site.

Today’s cathedral had two medieval predecessors, the remains of which can be viewed in the crypt. The first cathedral was consecrated by St Vergilius in 774. The building was expanded under Archbishop Hartwik (991-1023). Archbishop Konrad I (1106-1147) added two west towers. 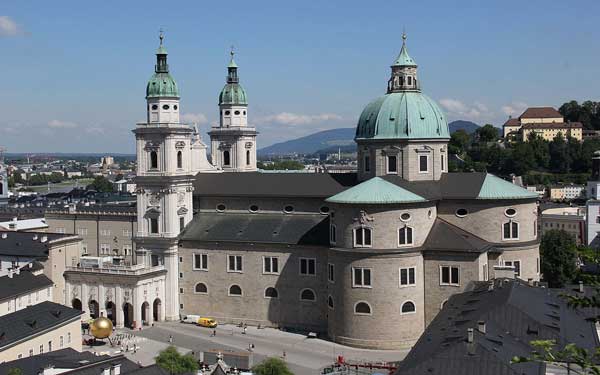 Best hotels in Salzburg near the cathedral

In 1167, the cathedral, which was still primarily Carolingian, burned down. Archbishop Konrad III (1177-1183) then had a vast Romanesque basilica with five towers built that was 110m long and which was similar in appearance to the cathedrals in Mainz and Worms. After a fire, it too was demolished in 1598.
The cornerstone of the existing baroque cathedral was laid in 1614. In 1628, the cathedral was consecrated by Archbishop Paris Lodron. About forty years later, the towers and surrounding squares were completed.

The baroque building has impressive clear-cut forms, unique decor and a bright facade made of local marble. The architect, Santino Solari, came from Italy. He created the most important church edifice of his time north of the Alps and influenced the architecture throughout Austria and southern Germany.

2009 was “50 Years Re-Opening of the Salzburg Cathedral” after the bomb attack in the second world war. A reason for joy, being grateful and celebrating.

October 16th 1944 the first bombs attacked Salzburg right into the center, many persons were killed and the dome of the Salzburg Cathedral was ruined. Archbishop Dr. Andreas Rohracher stood up immediately for the reconstruction. 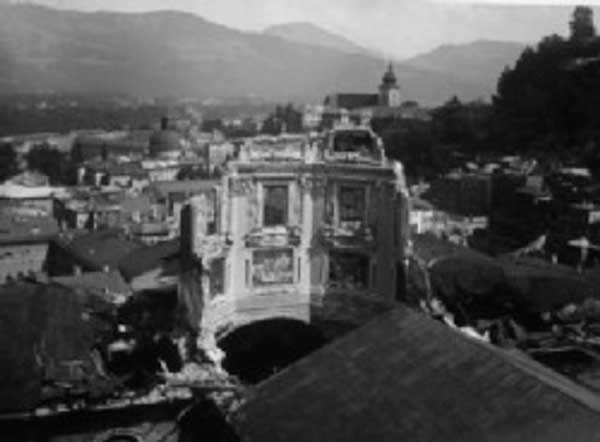 But it was a long and hard way to go. In May 1959 the Salzburg Cathedral was reopened in its full height and beauty. The entire Diocese, Land Salzburg, the Republic as well as the general public of Salzburg were involved in the quick reconstruction of the dome of Salzburg Cathedral.

In 200, the anniversary year, new clear-up-operations were finished and the so called “Konrad Crypt” developed and be opened.

The crypt has existed in its current form since the cathedral was reopened in 1959. Before that, there were vaults in today’s lower church which could only be accessed through the floor of the cathedral (like in the side chapels). The vaults served as burial grounds for Salzburg archbishops. A bomb during the Second World War, which caused the dome to collapse, destroyed these vaults and the entire floor under the dome. During clean-up efforts, numerous foundations and wall fragments of buildings that existed prior to the current baroque cathedral were found. It was decided to install a cement ceiling and thus create an accessible crypt.

Best hotels in Salzburg near the cathedral

The crypt’s central purpose was to be a place of burial for deceased Salzburg archbishops. Since 1619 – the year Prince Bishop Markus Sittikus of Hohenems, who had the cathedral built, died – virtually all deceased Salzburg (prince) archbishops have been buried in the crypt or in the previous vaults.
The crypt is divided into several rooms. One was made into a chapel in which church services can take place. In the 1990s, the steps to the lower church were moved to their current location. This made it possible to create an adoration chapel in which worshipers can perform Eucharist adoration. 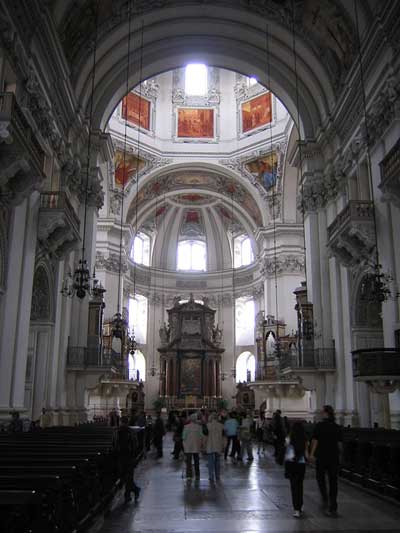 Relics in the Salzburg cathedral

Concerts in the Salzburg Cathedral 2017

*Discounted tickets for pupils, apprentices, alternative civil service and students
(up to 27 years of age with identification) valid for category B, nave.
Children under 15 accompanied by their parents are free of charge in category B.

Concerts in the Salzburg Cathedral 2017
Admission for cathedral concerts

*Discounted tickets for pupils, apprentices, alternative civil service and students
(up to 27 years of age with identification) valid for category B, nave.
Children under 15 accompanied by their parents are free of charge in category B.

Improvised concerts € 20,00
Midday organ music € 5,00
Cathedral concerts
Tickets in categories A and B

Tours of the cathedral

Opening Hours of the Salzburg Cathedral
Admission to the cathedral is free, donations are welcome.

For church service attendees, the cathedral is open Monday to Saturday from 6:15 a.m. and on Sundays and public holidays from 8:00 a.m.

The cathedral is generally open for visitation at the following times (changes are possible due to church services, concerts etc.):

Due to rehearsals and performances of ‘Jedermann’ on the cathedral square, there will be changes to the cathedral access during certain afternoons in July and August. On these occasions, the entrance will be at the back of the cathedral next to Residenzplatz 9, across from the post office.

The crypt is closed during church services and cathedral concerts. Furthermore, the crypt may stay closed without prior announcement for organisational or technical reasons.

*The last mass only takes place at 12:00 p.m. on some holidays. You can find more detailed information in the current church service schedule.

The cathedral destroyed in 1944

2009 was “50 Years Re-Opening of the Salzburg Cathedral” after the bomb attack in the second world war. A reason for joy, being grateful and celebrating.

In 200, the anniversary year, new clear-up-operations were finished and the so called “Konrad Crypt” developed and be opened.

Posted in Austria and Europe

St Peter’s Abbey Salzburg
Santa Maria della Salute basilica in Venice
Let nothing disturb you, nothing frighten you. All things pass. God does not change. Patience achieves everything. He who has God finds he lacks nothing: - St Teresa Of Avila