Cologne Cathedral – The Shrine of the Magi is the largest, most artistically significant, and, in terms of its content, most ambitious reliquary of the Middle Ages. The relics were brought to Cologne from Milan duomo in 1164. From about 1190 to 1220 a number of artisans worked on the shrine in the workshop of the goldsmith Nicholas of Verdun and in workshops in Cologne and along the river Meuse that continued his work.

Ornamentation on the shrine includes gold- and silver-embossed, fire-gilded figures, filigree panels set with precious and semi-precious stones, intaglios, and cameos, and columns, arches and profiles trimmed with enamels. 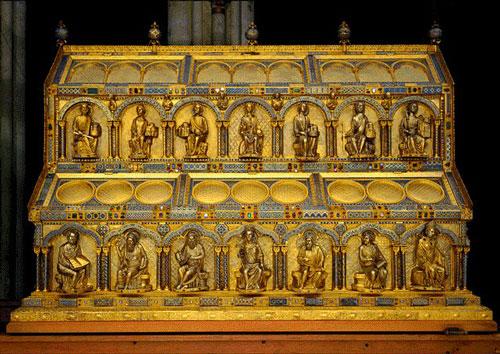 Measures of the Cathedral

Coming to Cologne and having the best stay:

Guides and tours in Cologne : 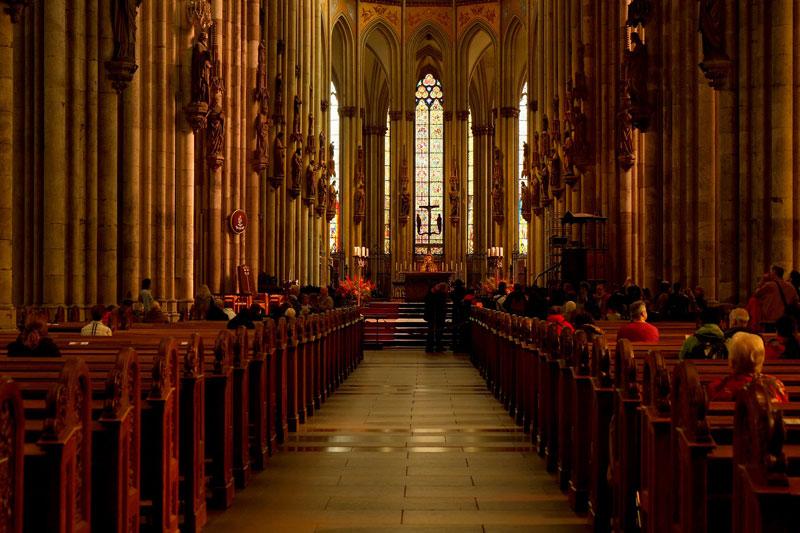 The images depicted on the shrine include scenes from the history of salvation from the dawning of time to the Last Judgment. Although the shrine was shortened by one axis after being hidden from French revolutionary troops in 1794, it was largely restored to its original shape during the most recent period of restoration, which lasted from 1961 to 1973.

The intention in the Middle Ages was that the shrine would be placed in the crossing. Today, however, it rises above the medieval high altar at the back of the inner choir, making this area the main focus of the Gothic cathedral, which was built as a stone reliquary for this precious shrine. 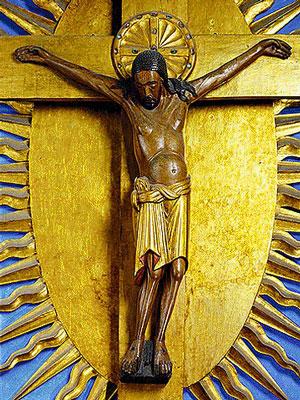 Legend has it that when Rainald of Dassel brought the relics of the Magi from Milan, he also brought with him a statue of the Madonna. This high Gothic carving of the Milan Madonna from Duomo Milan was made in the cathedral workshop sometime around 1280/90 as a replacement for the original, which was obviously lost in the fire that destroyed the old cathedral.

This is the oldest representation of the Madonna in the cathedral that is said to have miraculous powers. Originally, the painted carving stood beneath a baldachin crowned with a gable on the altar of the Lady Chapel.

Like the figures on the choir piers, which it resembles in terms of its posture and garments, the Milan Madonna was influenced by French art. The figure was restored sometime around 1900; the colouring, sceptre and crown date from this period. 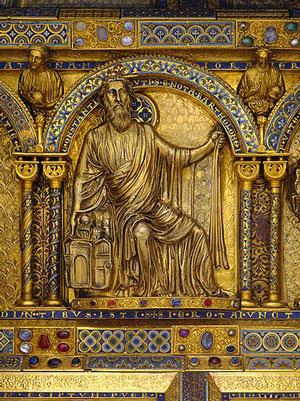 The Cologne Cathedral in the Year 1998

Even though Cologne Cathedral was hit by 14 large aerial bombs it survived also the Second World War. Many years of reconstruction followed. Modern construction styles were used – above all- in the northern transept..

The most conspicuous mark of the post war era which can be seen in the picture is the modern crossing tower. It was formed by Cologne Cathedral Architect Willy Weyres and the sculptor Erlefried Hoppe.

Even today some of the wounds slayn during the war exist. They must be repaired together with the damages caused by weather and pollution. Therefore Cologne Cathedral is an“eternal costruction site” and will hopefully stay thus for a long time to come, because these enduring works on the cathedral show us how important the cathedral still is for us today.

Measures of the Cathedral

It is easy to reach Cologne Cathedral either by car or by public transport (stop “Dom/Hbf”). The cathedral is situated right next to the central railway station (Hbf.) and simply cannot be “overlooked” because of its hight.

Working days from 7:45 hours until 9:00 hours. On saturdays from 14:00 hours until 18:00 hours. You find the confessionals at the chapels in the ambulatory.

The Cologne Cathedral in the Year 1170

The place in which the cathedral is situated today has been since late roman times the place where the first christians assembled in Cologne. Several churches- each one in turn larger than its predecessors- have been built on this site near the city walls. The first of these churches of which we know what it looked like was the Carolingian cathedral finished around 800. It had on each end of the nave a transept as well as a choir.The altar to the east was consecrated to Maria and the western altar was consecrated to St. Peter. Under the archbishop Bruno a northern and a southern side aisle were added to the nave. This cathedral stood until the 13th century and underwent only small changes during this time. The picture shows the cathedral as well as the St.Maria ad gradus church situated towards the east of the Cologne Cathedral.

The Cologne Cathedral in the Year 1248

Ever after archbishop Rainald von Dassel brought the relics of the Magi to Cologne in 1164 the cathedral was not only the official church of the Cologne archbishop, but also became one of the most important pilgrimage churches throughout Europe. Therefore it desperately needed another architectonic form. The old cathedral had to be pulled down step by step before the building of the Gothic cathedral could be begun in 1248. When the workers tried to demolish the eastern choir by fire the whole building burned down. The western parts were restored for the time being in order to be able to hold services there.

The Cologne Cathedral in the Year 1322

In 1322 the Gothic choir was consecrated. Its vautlts span high above and a filigree wood of buttresses and flying buttresses surrounded the building in order to back up its walls. Once again this part of the building was closed up by a wall towards the west so that services could be held in the whole of the choir building. This also enabled the cathedral chapter to hold its meetings in the inner choir. The eastern choir was richly decorated even before they started to build the remaining parts of the cathedral. Important works of art which had already been in the old cathedral as e.g. the Gero cross and the shrine of the Magi were placed in the new building. Saints like e.g. Irmgardis and important archbishops like e.g. Philipp von Heinsberg were once again buried in the choir chapels.
The Cathedral in the Year 1794

After the Gothic choir was finished the two aisles of the nave were built as well as two storeys of the southern tower.Until approximately 1530 works on the cathedral continued and the building was adorned with furnishings. Then lack of money and a general lack of interest stopped the building. The nave was closed with a makeshift roof. The building remained apparentely a fragment as shown in the picture, but seen from inside it was a large church which was obviously regarded as sufficient. Therefore its rich decoration inside was continued throughout the following centuries. In 1794 the troups of the french revolution marched into Cologne. The archbishop and the cathedral chapter fled. From then on the cathedral served during many years profane purposes, e. g. as a warehouse. Only in 1801 it was consecrated again as a church.

The Cologne Cathedral in the Year 1864

The love and the enthusiasm of the Cologne people for this extraordinary building grew especially during those years in which the cathedral was profaned. Many forces united so that they could carry on the building of the cathedral in 1842. About half of the necessary money came from the Prussian treasury the other half was raised by the Zentral Dombau Verein (Central Association for Building the Cathedral), in which many committed Cologne citizens were engaged. A very intensive and effective phase of building began. The builders strictly followed the medieval plans in regard to form, but they used modern building techniques.
The picture shows that in 1864 the two transept facades as well as the triforium of nave and transept were already finished. The wooden roof truss above the medieval choir was replaced by an iron construction which covered the whole building. It was one of the most progressive examples of its time. In 1880, finally, both of the towers were finished.

The Cologne Cathedral in the Year 1998

Even though Cologne Cathedral was hit by 14 large aerial bombs it survived also the Second World War. Many years of reconstruction followed. Modern construction styles were used – above all- in the northern transept.. The most conspicuous mark of the post war era which can be seen in the picture is the modern crossing tower. It was formed by Cologne Cathedral Architect Willy Weyres and the sculptor Erlefried Hoppe.
Even today some of the wounds slayn during the war exist. They must be repaired together with the damages caused by weather and pollution. Therefore Cologne Cathedral is an
“eternal costruction site” and will hopefully stay thus for a long time to come, because these enduring works on the cathedral show us how important the cathedral still is for us today.

The Chapel of Our Lady of the Miraculous Medal, Paris
Kevelaer Basilica

Prayer for the Protection of Children

What does St Therese Little Flower say about Divine Love

Why do Catholics pray the Rosary? And why is praying the Rosary important!

The Burial of Jesus – Matthew 27:57-66 – Holy Saturday Message and Meaning

Our Lady of Tihaljina statue near Medjugorje