History of the 1st and 2nd Blue Cross in Medjugorje 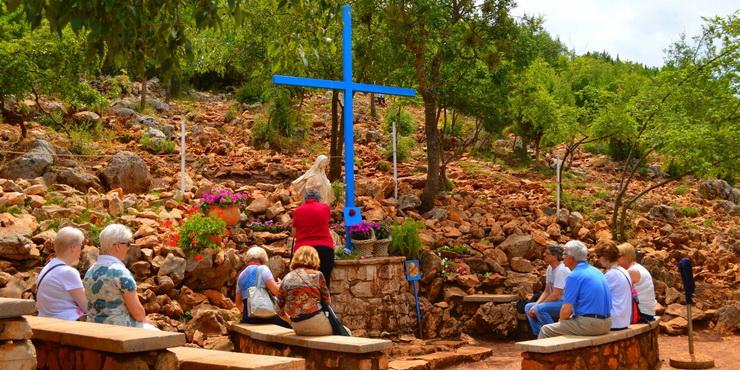 Blue Cross – a place of prayer visited by all pilgrims, especially those who can not easily climb the Apparition Hill and Križevac, in Medjugorje. Everyone who comes here notices that at a relatively short distance two places are identically marked – a large blue iron cross and under the cross a statue of Our Lady.

History of the 1st Blue Cross

The first, left “Blue Cross” was erected in 1982. This is how it happened:

On the communist holiday, the so-called Borac Day, July 4, 1982 (it was Sunday), a group of young men and women who were in front of Vicka’s old house decided together with Ivan the Seer, despite the police ban, to climb Podbrdo to the so-called “Main Place” and there they began to pray and praise the Lord! And so praying and praising the Lord, Our Lady unexpectedly appeared to John and told him that she wanted a prayer group to be formed and to meet twice a week, and that she would accompany the prayer group with her apparitions! She also said that they set the days and times, as some members were employed and could not attend the apparition at all times!

There were certain days, it was Tuesday and Friday and meetings in the evening after the evening Holy Mass when everyone could attend! And so the prayer group, at the request of Our Lady, went to Podbrdo for two days in the evening and gathered for song and prayer at the indicated evening time around 10 pm! 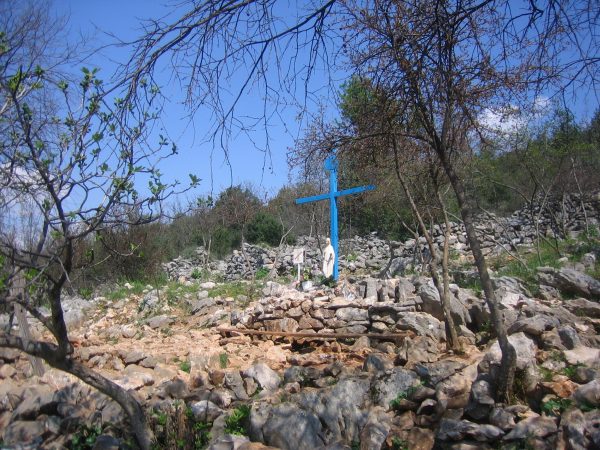 So on Tuesday, July 27, the prayer group goes to the Apparition Hill, but from this side where the visionaries went to the Hill in the first days! At the place where the first Blue Cross is today, Ivan suddenly had a vision, in which he was warned not to climb the hill with a prayer group, because not even 200 meters from that place an ambush was set by several policemen!

And so, that evening Our Lady protected the prayer group and told Ivan where the group could meet for prayer, so as not to risk arrest!

One member of the prayer group, more precisely Nedjeljko Brečić, in agreement with Ivan the Seer, marked the place where Our Lady protected the prayer group with her apparition and placed a wooden cross, approximately 2.5 meters! To protect it from rain and rust, Nedjeljko and Ivan took paint from Ivan’s father Stanko, who painted one fence! The color was blue and that’s why that cross became the “Blue Cross”!

After the communist discipline was relieved, the group would meet at the Blue Cross and around the Blue Cross and in a small bay, which is close to the Blue Cross, some 15 meters away! As since 1987, anyone who wishes can attend individual apparitions together with the prayer group (because until that year the group was closed and only members could attend the apparitions), the space of prayer to that bay is slowly expanding!

In 1989, with the permission of a prayer group, an Italian pilgrim (Fausto of Bormio) replaced the wooden cross with an iron one, because the wooden cross had been burned by candles, as many people would meet and pray there, knowing that it was a place where Our Lady appears!

History of the second Blue Cross

The second “Blue Cross”, located on the right, was erected in 1999. Because the space around the first cross was cramped and difficult to access, and many people wanted to pray there and attend prayer group meetings.

And it happened like this: On July 4, 1999, on the 17th anniversary of Ivan’s prayer group, after the prayer program for the group, the member who placed the first blue cross, Nedjeljko Brečić, died! In his memory, the members of the prayer group, together with Ivan the Seer and the boys from the Cenacolo Community, erected another Blue Cross in a small bay around which they arranged a prayer space with stone benches.

And since then, in front of the second, newer Blue Cross, a prayer group has been meeting, and from then until March 18, apparitions to the visionary Mirjana took place there.

Translation and arrangement from: