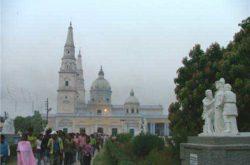 Basilica of Our Lady of Graces in Sardhana

Basilica of Our Lady of Graces, also known as Churches among the Churches, is dedicated to Virgin Mary. The Church was built by Begum Samru, a Nautch girl of 14 who married a European mercenary soldier Walter Reinhardt Sombre. Samru converted to Roman Catholicism in 1781 and adopted the name Joanna Nobilis. She is regarded as the only Catholic ruler in India, and ruled the Principality of Sardhana in 18th and 19th century.Continue Reading 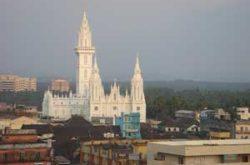 Basilica of Our Lady of Dolours, Thrissur 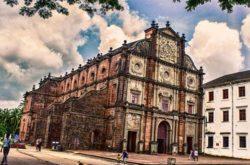 Basilica of Bom Jesus and the Tomb of St. Francis Xavier 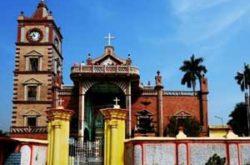 Bandel Church – Basilica of Our Lady of the Rosary

History of Bandel Church  Around the middle of the 16th century, the Portuguese began using Bandel as a port. During or around 1571, they were given permission by Akbar, the Mughal emperor, to build a town in Hooghly. As they began settling around the area, their priests began to baptise the natives – by 1598, Catholics in Hooghly numbered around five thousand, including natives and mixed races.Continue Reading

Empty tomb of Jesus – What question, if I got an answer to it, would open up my heart to Easter morning?

What is a Minor and Major Basilica?

Jesus promises the Power of the Holy Spirit and What are Jesus commandments? John 14, 15-21 Commentary

14 Stations of the Cross explanation with pictures

Beautiful Fatima Prayers taught by the Angel and Our Lady

San Damiano Cross is speaking to us also! Detailed explanation of the images and their meaning

The great Duomo Organ in the Milan Cathedral

How does the Candlelight Procession at Fatima Portugal looks like? See it here!

How well do you know the Image of the Merciful Jesus? – Take our Pilgrim quiz

What happens if you drink Holy Water? And how to use it properly with faith!

Where is Medjugorje located and why it is so beautiful there? Here’s why.

What is the Sacred Heart of Jesus meaning and history?

Novena to the precious blood of Jesus Christ

Parable of the Workers in the Vineyard – A person doesn’t tolerate if another is better. This is the original sin

Eucharistic adoration – What is Perpetual Adoration of the blessed sacrament?

Description of Our Lady, as she appears in Medjugorje

Glory to God in the highest prayer – Give blood and receive the Holy Spirit. John 17:1-11 Commentary

Who was St Leopold Mandic, Servant of the reconciliation, who confessed daily for 10 hours for 50 years? His Life, Prayer, Novena and body in Padua.