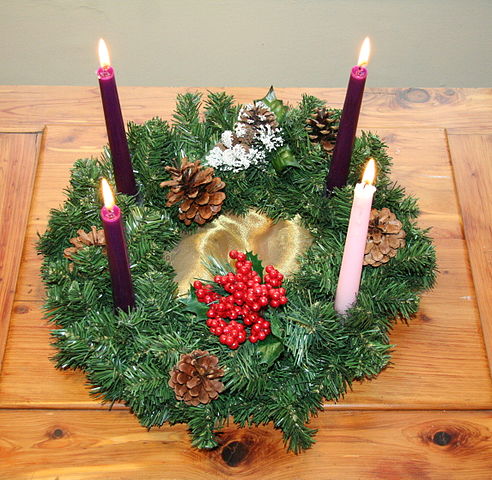 Today, we can buy an Advent wreath in any store, which is a reflection of the growing commercialization of Christmas and December. A wreath we make ourselves is worth much more.

It can be woven from spruce twigs or other evergreen plants that do not lose needles and always stay green. This greenery exemplifies fidelity to God and his word. We can also make a wreath made of laurel twigs, which signify victory over sins, cedar twigs, which are a symbol of power, twigs of thorns (God’s wood), reminiscent of a crown of thorns, which the soldiers wove for Jesus.

We weave a wreath in the shape of a circle, which illustrates eternity and fidelity, as it has neither a beginning nor an end.

4 Candles of Advent names and colors

The most eloquent on the wreath are three purple candles and one pink.

The choice of purple is not accidental: it means the color of repentance and penance. With this color, we express sorrow at Jesus ’suffering and hope in anticipation of his coming, which marks the beginning of salvation. The pink candle represents the joy of the approaching birth of Jesus.

The light of candles reminds us of the light of salvation from the darkness of sins and brings us hope and salvation. During Advent, lighting candles has an additional meaning. We light one more candle every Sunday and so the light of anticipation rises like the morning dawn. In a spiritual sense, this means the closer we are to God, the more light there is in our lives as well.

The meaning of the candles we light on Advent Sundays:

In addition to all this, candles have additional symbolism:

Some commentators also link the four candles and the four Advent Sundays to four periods in the history of salvation:

Today, the candles on the Advent wreath are of different colors: red, gold, silver, white … When you make an Advent wreath together with your children this year, use purple to present them with the symbolism that the candles also express with color. It should be made without additional decoration in order to express the described symbolism.

History of the Advent Wreath

The first Advent wreath as we know it today appeared in 1838 in Hamburg, Germany, in a home for poor children. Evangelical pastor Johanan Wichem gathered the poor children and placed them in an old house that became their home. He wanted to brighten up Advent days and the anticipation of Christmas for his protégés, who had a hard childhood. He made a large wooden perimeter and placed 24 candles on it, 19 small ones for each day and 4 large ones for 4 Advent Sundays.

He gradually lit the candles and the children liked this ritual so much that he decided to repeat it every year. Thirteen years later, this wooden perimeter began to be adorned with evergreen twigs. Soon wreaths were woven only with evergreen twigs. This beautiful custom eventually spread throughout Germany. From there he moved to other European countries, then to America, and at the end of the century, he became domesticated all over the world where Christians live. The Advent wreath has undergone a change: there are only 4 candles on it for 4 Advent Sundays.

Priests bless the Advent wreath on the first Sunday of Advent. Priests turn to people and the created world with a blessing that emphasizes God’s greatness and goodness. The basic form of blessing has two parts that proclaim God’s words and thanksgiving for God’s help. The second part praises God with rites and prayers. Believers ask for God’s help. The center of blessing is prayer.